Renault to announce 2009 line-up on Wednesday 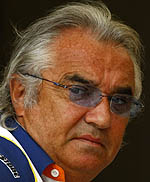 Renault boss Flavio Briatore has revealed that the French team will confirm its 2009 line-up on Wednesday.

Despite intense speculation for much of the year that Fernando Alonso was destined for Ferrari, two convincing wins, not to mention the fact that Kimi Raikkonen extended his contract with the Italian team, have left the Spaniard little option but to remain with the team with which he secured back-to-back titles. It is understood that despite further speculation, Nelson Piquet will also be retained.

"Wednesday is the day," Briatore told Reuters at Interlagos, when asked about his team's plans for next season. "We will announce both drivers on Wednesday."

GP2 title challengers Romain Grosjean and Lucas di Grassi have been linked with Piquet's seat, but it is thought that the Brazilian might have done enough to save his job, despite crashing out of yesterday's season finale on the first lap.