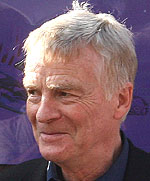 Following his victory over the News of the World in the High Court in London, FIA President Max Mosley, who is also taking legal action against a number of European newspapers and websites, shows no sign of letting up in his pursuit of changes to privacy laws.

Mosley's lawyer, Dominic Crossley of Steeles (law) llp, has revealed that on Monday, the FIA President will ask the European Court of Human Rights to force newspapers to warn individuals before publishing information about private lives,

"It has already been established in the High Court that Mr Mosley was the subject of an illegal and devastating invasion of his private life by the News of the World," said Crossley. "The only effective remedy would have been to prevent the publication in the first place by means of an injunction; but because he did not know about the article beforehand, the opportunity of an injunction was not open to him."

The decision in the High Court led to an outcry from many in the media who feel that while some of the stories affected might be nothing more than salacious tittle-tattle fit only for the lowest of tabloids, others which may be of genuine interest to the general public - incriminating stories about politicians for example - will be covered by the same ruling.

If the application to the European court is successful "everyone in the UK will equally share in the right to have an editor's decision to publish reviewed by a judge before irreparable damage can be done," said Crossley.

However, many feel that the ruling will only benefit those wealthy and famous enough to take on the media.