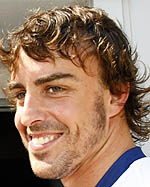 A section of the Spanish media is claiming that Ferrari's recent decision to re-sign Kimi Raikkonen until the end of 2010, is a smokescreen, aimed at putting everyone off the real story, which sees Fernando Alonso heading to Maranello as early as next year.

Spanish newspaper Marca claims that Santander, which headed to McLaren with Fernando Alonso in 2007, is behind a move which will see the two-time champion join Felipe Massa.

The Spanish banking giant is due to take its account to Ferrari next year, and, having lost out when Alonso quit McLaren after just one season, wants its national hero back on board and in a winning (red) car.

It's claimed that the bank will not only meet Alonso's financial requirements but will also meet any compensation demanded by Raikkonen.

It is fair to say that the announcement that Raikkonen is to stay with Ferrari for two more years caught many by surprise, especially since the Finn appears to have lost his sparkle in recent months, a situation not helped by the fact that he is now almost certain - barring a miracle recovery - of having to play second fiddle to his Brazilian teammate.

While several teams, most notably Honda, have been wooing Alonso, the Spaniard needs to be back in a winning car, and other than BMW - which is backed by Santander's rival Credit Suisse - Ferrari appears to be the only option.