Dennis unimpressed with GP2's 'class of '08' 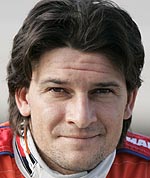 At the end of the 2008 GP2 season, McLaren boss Ron Dennis has reiterated comments made earlier this year, claiming that no one talent has stood out.

The series which has seen Nico Rosberg, Nelson Piquet, Timo Glock and Lewis Hamilton achieve success before moving in to F1, concluded this weekend with Italian Giorgio Pantano (right) taking the title.

Though Pantano is eager to return to F1, it seems unlikely, with many tipping the 'veteran' to head to the States.

While the media has shamelessly focussed on Bruno Senna, he has had a hit and miss season, making numerous mistakes, and rarely giving fans - or F1 bosses - the merest glimpse of the sort of talent possessed by his legendary Uncle.

Another who proved to be inconsistent - a major flaw as far as F1 teams are concerned - is Romain Grosjean, currently test driver for Renault. The French team's other driver, Lucas di Grassi, did impress, having missed the first three rounds, he was a consistent points scorer and finished third in the championship, one point behind Senna.

However, even he failed to impress Dennis. "Exceptional talent in GP2 jumps out at you," he told reporters. "At the moment there are some guys lacking a bit of experience that could do well next year but...I don't think there's anyone in GP2 that jumps at you as being a phenomenal talent at the moment.

"But of course it is the feeder series and some great drivers have come out of GP2," he continued. "There are some young ones who will maybe get better next year but no one who is really sensational. They have the odd good race but no one has been dominant."