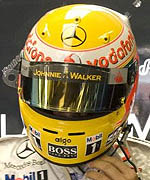 Serving clear notice that he intends hanging on to his World Championship lead, despite fears that the forthcoming race at the Autodromo Nazionale will favour Ferrari, Lewis Hamilton topped the timesheets on the final day of testing at Monza.

The English youngster, who took over from Heikki Kovalainen, picked up where Thursday's programme concluded. He continued the evaluation of mechanical and aero set-ups - which according to the team leaves it "encouraged for the forthcoming Italian Grand Prix".

Second quickest, and 0.404s off Hamilton's pace was Ferrari's Kimi Raikkonen. The Finn worked on finding the best set-up for the car for the Monza race, as well as on-going development of aerodynamic and mechanical solutions for the remainder of the season.

"It was a good day, during which we looked to fine tune the car for this track as well as trying a few new things," said the World Champion. "I would say we have done a good job, even if it is too early to say what the situation will be here during the race weekend.

"It was a pleasure to meet with President Montezemolo, who visited the track today," he added. "Now we have to try and do everything as well as possible to get back to winning again, starting with the race in Spa. The World Championship? I will give it my best shot and then we can count the points at the end."

A surprise third was Giancarlo Fisichella in the Force India, the Italian finishing 0.665s off Hamilton's pace. The Italian continued the evaluation of set-ups and wing levels specifically for this race, his home Grand Prix, together with work to optimise balance and braking over the kerbs. Again the VJM01 ran faultlessly, allowing Fisichella to complete more than 600km and bring the total test mileage to over 1,700km.

The team will now return to Silverstone to integrate the test's findings into its race preparations for the Italian Grand Prix and the next event on the calendar, the Belgian Grand Prix, in just over a week's time.

"Today we made some positive steps forward for the Italian Grand Prix," said Fisichella, "particularly with the balance and set-up. I could push, particularly in the afternoon and the pace over the longer runs was also good. You never know what the other teams are doing with their own programmes, but I think the race will be very close between us and Honda. I think we've made good progress here."

"A very positive end to the test, again with good reliability," added Dominic Harlow. "We've had a very productive week here, completing all our programme and accumulating some useful information to prepare for the Italian Grand Prix. It's always a pleasure to test in Monza and thanks to the drivers, test team and particularly Ferrari, Bridgestone and our other partners for all their efforts. We've had a very useful test that has helped to build on the step in performance that we saw in Valencia."

Just 0.002s off Fisichella's pace was Kazuki Nakajima in the Williams, as the Grove outfit continues to show progress here.

The busiest man today was David Coulthard, as Red Bull attempts to get its season back on track. On the agenda was pre-Italian GP race preparation, with the Scot concentrating on testing mechanical set-ups specifically for Monza, and finding a reasonable balance on the RB4. Some performance related work was carried out in the afternoon, when the track conditions were at their hottest and slowest.

"This three day test has produced positive results for us," said Chief Test Engineer, Ian Morgan. "We can be particularly satisfied that the car ran one hundred percent reliably on track throughout and we completed over eighteen hundred kilometres, the most of any team here, with today being particularly busy.

Renault also concentrated on race preparation for the Italian Grand Prix, as Fernando Alonso sampled a variety of set-up solutions to perfect the R28's low downforce package. There was also the chance to complete some suspension work as the team worked on improving the car's behaviour through the chicanes.

"Another valuable day in Monza," said Alonso, "we have learnt some interesting things that will help us prepare for the race here in a couple of weeks time. We tried lots of different things with the set-up and then did some suspension work in the afternoon as using the curbs is important here. I think we have taken the car in the right direction and we have a good basis to build on over the race weekend."

"We spent the day looking at the set-up and completing all the usual Monza-specific work," added Christian Silk, "because this place is so different to all the other tracks that we run at. We continued with our race preparation programme, collecting data and found some very positive directions with the set-up, so we are in reasonable shape going into the race here."

Having driven on Thursday afternoon, Sebastien Bourdais brought Toro Rosso's programme to a close, as he worked on race preparation for the Italian Grand Prix. On the agenda; a tyre comparison programme, evaluation of brakes, the Monza-specific aero configuration and general set up work. However, five red flag periods and a mechanical problem on the car reduced the Frenchman's running time in the afternoon.

"In general, this three-day test has gone well and produced some quite promising results," said Chief Test Engineer, Gianvito Amico. "Our focus was always on reliability and consistency, rather than looking for performance and the results would indicate that we are in good shape for the up coming races."

Timo Glock was on duty for Toyota, his first experience of the TF108 around the legendary Italian circuit. The German spent his day adapting to the Monza-specification aerodynamic package as well as concentrating on finding better turn-in capability and a brake balance he was comfortable with while also adjusting the car to cope with Monza's notoriously high kerbs. He tried a number of different set-ups before, half an hour from the end of the test, the car got away from him and he clipped a tyre barrier at the second Lesmo bringing the Japanese team's test to an early conclusion.

"We will have to analyse in detail what the problem was," said the German. "Until the accident the test was going okay but we had a few problems around midday. Then in the afternoon I think track conditions were a bit slower and we couldn't really make strong progress. The crash was not nice and I'm not sure what happened. We'd had a bit of understeer and the kerb-riding was not too comfortable but I wasn't aware of making a mistake. We will have to have a close look at the data."

"It was unfortunate that Timo went off just before the end," added Test Team Manager, Gerd Pfeiffer, "but if it has to happen at all, better then than at the beginning of the day. We had already worked through the majority of the schedule, which was aimed at familiarising Timo with the specific demands of Monza, which are quite different to other circuits. We did a lot of experimentation with brake feel, ride heights and general aerodynamic set-up. It has been a productive three days with consistent conditions and no weather interruptions. I want to thank everyone for their efforts, we have collected a lot of data and will take it all into account before the Grand Prix here next month."

After two days with Nick Heidfeld on duty, today Robert Kubica continued to work on the setup of the F1.08. The Pole tried different solutions on the aerodynamic and mechanical side as well as sampling the tyre options for the Monza race. In the morning, Kubica had a minor off. Although the car sustained only a little damage to the left-front the repairs were time consuming. The team continued with it's testing programme as scheduled after the lunch break. However, a couple of further red flags as well as a small electrical problem cut the Pole's track time down to 57 laps.

Jenson Button concluded Honda's programme. The Englishman's schedule included a suspension evaluation, along with further aerodynamic and set-up work in preparation for the forthcoming Belgian and Italian Grands Prix. Button also continued the evaluation of the medium and hard tyre compounds which will be used for these races.

"This week's test has been useful in developing our direction for the next two races," said Button. "We have worked on finalising the downforce packages required for Spa and Monza along with an initial study of the tyre compounds. Although we have made some progress, the balance of the car is not where I would like it to be, particularly for Monza, and we need to analyse the data carefully to make improvements before the race weekend."