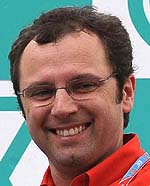 Further to our previous story, regarding The Times' claim that Anthony Hamilton enjoyed a "secret" talk with Ferrari's Stefano Domenicali in the Hockenheim paddock yesterday, thereby suggesting that the Italian team is hoping to secure the services of Lewis Hamilton, the Italian and Mercedes' Norbert Haug have ridiculed the report.

Domenicali admitted that he was not aware of The Times claim, but when told what the newspaper had suggested, said: "That's fantastic! It's good news!

"I was walking away from Norbert's party because I had other things to do with our sponsor," he continued. "Anthony just came up behind me and just said hello and that's it, very easy. It's nice to see how these things can grow. Everyone has seen it, I think. Easy."

While, Haug added mischievously: "I think that's a great place to start negotiations with our driver: behind the Mercedes grandstand. Of course Stefano would do that! Why would he not meet in a hotel room or wherever? And he's a gentleman, by the way. He's not coming to our function and then talking to our driver. But I think it's great that there is some communication going on next to the race track, and I think that was it."