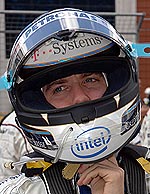 Following another difficult weekend for Nick Heidfeld, BMW boss Mario Theissen has vowed to help the German work through his problem, particularly with regards qualifying.

After six round of the 2008 World Championship, Heidfeld, whose best qualifying performance to date is fifth (Australia), has yet to out-qualify his teammate.

"When it comes to qualifying, he is currently encountering a low," admitted Theissen. "Now we have to make a joint effort to help him overcome this situation as quickly as possible.

"He has significant difficulties getting the tyres up to working temperature for a fast lap," Theissen added. "While Robert only encounters first hints of this problem, Nick is already in deep trouble. This is a situation we have witnessed throughout the season. However, as soon as his tyres are warm, the problem is history.

"Nick fully immerses himself in the technology and tackles the situation. He is going to analyse the issue together with our engineers. I hope that we will quickly succeed in isolating the cause. We have to discover if there is a factor which represents a bigger obstacle for Nick than for Robert, a task that will require a lot of fine-tuning."

Theissen reflects that Kubica - currently fourth in the Drivers' Championship, twelve points ahead of his teammate, encountered his own problems in 2007.

"Robert encountered a similar low. However, together, we analysed the situation and defined remedy measures. And we did so successfully.

"Nick will return to the road to success, we are fully aware of his true competitiveness. I have often watched him under pressure and in these situations he delivers at his very best. I know that he has what it takes to cope with the pressure and to analyse the technology. These are two crucial basic requirements for solving the problem."

Canada, the next round of the 2008 championship, is where Heidfeld scored his best finish in 2007, a performance the former F3000 champion will be keen to emulate.