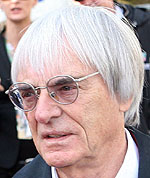 The queue of experts lining up to take a pot-shot at McLaren boss Ron Dennis following Sunday's Brazilian GP, and Lewis Hamilton's failure to secure the 2007 title, is now headed by Bernie Ecclestone.

The F1 supremo lays the blame for Hamilton's failure squarely on the shoulders of beleaguered McLaren boss, who has spent much of the year dealing with events off-track.

"If he hadn't called Hamilton in for that silly low-fuel and soft-tyres stint he could have won the championship," said Ecclestone, according to the Daily Telegraph. "He made no time on the road and lost 25 seconds making the stop. If he had only lost 15 seconds he would have been fourth."

"I feel sorry for Lewis after his performances this year as a rookie," he added.

As we await news of McLaren's appeal against the Interlagos race stewards decision, Ecclestone admitted: "Raikkonen is champion," adding, "I just hope he starts talking more." Which probably means that the Englishman, much like his friends in the British media who accuse the Ferrari driver of being boring and mono-syllabic, will now learn a few words of Finnish, Kimi's native tongue.