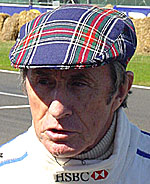 Three-time World Champion, and former F1 team boss, Sir Jackie Stewart, has hit out at the FIA ahead of Thursday's meeting of the World Motor Sport Council, accusing the sport's governing body of being biased in favour of Ferrari.

What started out - all that time ago - as the Italian team accusing an employee of sabotage, has developed into a full-scale political and legal row which could have massive implications for the sport and its future.

At a time when race fans should be looking ahead to the four races which will decide the 2007 World Championship - with two teams and their drivers locked in a fascinating see-saw battle - there is growing concern that the title(s) will be decided behind closed doors by men in suits.

There is also a growing fear that some of those involved have hidden agendas and are using the episode for their own means, citing (FIA President) Max Mosley's long running feud with (McLaren boss) Ron Dennis.

Stewart, who is a well recognised ambassador for the sport, and has worked to bring several major sponsors into F1, including the Royal Bank of Scotland (RBS), is fearful that the saga will have long term implications for F1, while also claiming that the perceived relationship between the FIA and Ferrari doesn't help matters.

"It seems some of the most powerful people are more aligned to Ferrari than anybody else," said the Scot, according to the BBC. "The FIA have historically been very close to Ferrari, closer to them than anyone else. There are more Ferrari representatives on the World Council than anybody else."

Stewart, fully accepts that there is a charge to be answered and that somehow a McLaren employee was in receipt of valuable Ferrari information. However, he is of the belief that the episode could be used to settle old scores.

"I'm not saying that there hasn't been wrongdoing," he said. "But to start witch-hunting and trying to implicate a team principal to a level that is currently going on, I think is negative to the sport."

Another person who feels that the saga is damaging the sport is Frank Williams: "This may cost Formula One some business," said the Englishman. "Hopefully not, but it's in every newspaper most days of the week.

"I just have a bit of concern that if it goes on much longer, it will deter sponsors who are currently present in F1, or who are close to coming in," he added.

Referring to the implications the saga - and its aftermath - could have on potential and existing sponsors, Stewart told Reuters: "The very foundations of this sport are based on its financial structure. And that's based on multinational corporations having the confidence to come in to a sport of integrity. Why would we want to take our dirty washing and go out in the street and say 'look, my dirty linen is dirtier than yours?'"