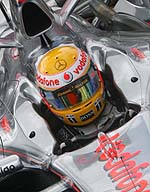 Lewis Hamilton put the "disappointment" of only finishing third at Silverstone behind him today when he topped the timesheets on the first day of testing at Spa Francorchamps, as the F1 'circus' prepares to return there after a one-year absence.

Overnight rain meant the track was damp when the session got underway, however, conditions improves as the day progressed. More rain is anticipated overnight, tonight with conditions expected to dry out again before the start of tomorrow's session.

The circuit has been revised for 2007 with a new final chicane, pit entry and start-finish straight.

The first part of the day for McLaren was spent conducting a series of aerodynamic tests to establish the effect of a range of downforce settings for the Nurburgring and Spa. The remainder of the day was spent concentrating on long runs using each of the tyre choices available for the circuit.

Hamilton completed 83 laps of the revamped 4.35 mile circuit, posting a best time 0.446s ahead of his nearest rival.

Robert Kubica was one of several drivers experiencing Spa for the first time in an F1 car. Nonetheless, this didn't prevent the young Pole setting a blistering pace as he completed 81 laps of the majestic track.

The BMW driver worked mainly on set-up in preparation for the Belgian Grand Prix, trying different mechanical and aerodynamic settings. In addition, he tested new mechanical components which according to the team revealed some promising results.

Third quickest, and 0.85s off the pace, was Ferrari's Felipe Massa. The Brazilian began a programme centred mainly on finding the best set-up for the car and on development of new components. He continues here tomorrow.

Ralf Schumacher kicked off Toyota's programme as he worked on set-up and tyres for the race at Spa and carried out comparisons of dampers and other systems. He will continue the test tomorrow.

"I'm one of the many drivers who rate Spa as the best circuit on the calendar," said the German, "so it makes for a nice change to come here for a test. It is always enjoyable to drive this track because it is a 'real' circuit and it has so many special corners.

"They have made some slight changes to the circuit for this year's race, including new tarmac and an amended Bus Stop, and they seem to have done a good job," he continued.

"The other major factor at Spa is the weather. Today we were lucky and the sun shone for most of the day but the Belgian Ardennes seem to have a climate all their own and you can never be sure what you are going to get. Today went well, we had no problems and the car felt good so we'll hope for more of the same tomorrow."

"It is good to have the chance to test here before the race because it enables us to have a preview of the new track layout," added test team manager Gerd Pfeiffer. "There have been changes made around the start-finish area of the lap and there is also a new tarmac around that area. So this week we will concentrate on set-up for the race here in two months. The drivers can get used to the circuit and we can work on tyre comparisons with the new surface as well as race start simulations. This gives everyone a useful head start for the Belgian Grand Prix.

"We are also preparing for the coming races and we put some work on dampers and other systems today. We completed our programme without major issues so this has been a positive day."

Nelson Piquet was fifth quickest in the Renault, the Brazilian making his debut here in an F1 car.

The aim for today was to establish a baseline set-up for the R27, and to adapt the RS27 engine to the day’s conditions.

Piquet’s programme was slightly hindered by an electronic glitch in the late morning, which forced him to stop at the end of the pit lane. The team found and solved the problem, and continued its technical programme.

"I was happy to be able to do today’s test on this circuit which is certainly one of the most beautiful in the world," said Piquet. "It’s undulating and there are several sections with a succession of challenging corners; it’s very demanding. I had a small problem this morning but this afternoon we were able to cover a lot of laps and we made excellent progress. I think we’ve got a good working baseline set-up for the rest of this week’s practice.”

“Our programme was delayed because of a glitch we had this morning," said Christian Silk, "but we managed to get the best out of the afternoon and the results are very interesting. We’re concentrating on preparing for the Belgian Grand Prix, but not only that as we’re also trying to progress in our overall development programme: we’re working flat out. Nelson said he was pretty happy with the car’s overall balance even if we still have a little work to do in this area. We’ll make a few more changes this evening to prepare for tomorrow with Heikki.”

David Coulthard completed 55 laps on the way to posting the sixth best time of the day, albeit 1.630s off Hamilton's pace.

According to its official press release, Super Aguri test driver James Rossiter posted a best time of 1:28.287, the sort of pace which would have the rest of the teams calling it quits and handing the Constructors' Championship to the Leafield based outfit. Sadly, it was a typo, though Rossiter's real time of 48.287 was still better than that of the Honda, Williams and Toro Ross drivers.

The Englishman spent the morning running through an electronic systems control evaluation before completing a general set-up programme during the afternoon.

Toro Rosso was having its first ever run at Spa, as the Belgian GP was not on the calendar in its maiden season. Tonio Liuzzi completed 63 laps as the team worked on tyre comparison, set-up work and evaluation of the downforce levels required for the Belgian track. A transmission problem delayed the programme in the afternoon.

"We spent the morning completing set-up runs and then in the afternoon we carried out a race simulation," said test team manager Dickie Stanford. "Unfortunately a problem slowed our progress mid afternoon.

"Nevertheless, we still completed a considerable number of laps. Tomorrow, Nico will be driving again and we will carry on with our set-up work for the forthcoming races."

Christian Klien, one of several drivers being linked with the vacant seat at Spyker, finished tenth in the Honda. Like its rivals, the main focus for the Japanese team is to gather chassis set-up data for the Belgian Grand Prix.

Klien spent the morning establishing the baseline set-up of the Honda RA107 car before working through a series of aerodynamic evaluations and ending the day with ace start simulations. He completed 63 laps in total.

Jenson Button will take over the car for the second day of the test tomorrow.

Time was made available at the end of the morning and afternoon session for teams to make practice starts from the starting grid.