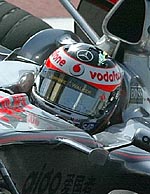 Ahead of today's sole free practice session, the air temperature is 29 degrees C and the track temperature is 40 degrees. It is bright, warm and sunny

The lights go green and first out is Sato, followed by Albers, Trulli, Sutil, Fisichella, Davidson and Vettel.

Once the first group have been out for the obligatory installation lap, Webber follow suit. The Australian lost track time in yesterday's second session following a transmission problem.

Standing outside the McLaren garage is Professor Sid Watkins, former FIA Medical Delegate, whose wife is writing the official biography of Bernie Ecclestone. Indeed, she's been writing it for some time.

Tem minutes into the session, Schumacher heads down the pitlane again. The only drivers that haven't been out yet are Massa, Raikkonen, Button and Barrichello.

As Schumacher begins his first flying lap of the day, Trulli and Fisichella head down the pitlane. In the BMW garage Sebastian Vettel is given his instructions for his first run.

As Fisichella goes third, Kovalainen is on a fast lap, going quickest in the second sector. The Finn crosses the line at 13.405, which puts him second behind Trulli, who has just gone quickest.

Button and Barrichello are on track, as Nick Heidfeld goes quickest (13.135). The Ferrari duo wait resolutely in their cars.

It's noticeable that several driver are still struggling for grip - there were numerous offs yesterday, though it was only Sutil who failed to get back on track.

Twenty minutes into the session, as Rosberg goes fourth, Raikkonen and Massa head down the pitlane. Alonso is already on track.

Raikkonen goes second (13.196), as Hamilton heads down the pitlane, the McLaren-Ferrari battle about to resume.

As Massa goes second, Alonso is on a hot lap, going quickest in the first sector. The Spaniard is quickest again in the final sector, posting 12.559 to go quickest. Moments later however, teammate Hamilton takes the top spot, the Englishman posting 12.378.

After twenty-five minutes it's: Hamilton, Alonso, Massa, Heidfeld, Raikkonen, Trulli, Kovalainen, Rosberg, Schumacher and Fisichella. Barrichello is the only driver that hasn't posted a time.

Fisichella posts personal bests in the first two sector, finally crossing the line at 13.316 to go sixth. He is running on the harder option.

While Sutil improves to seventeenth (14.142), Liuzzi fails, the Italian really struggling with the Toro Rosso. Another guy having a tough day is Barrichello, who is out on track but well off the pace.

Button fails to improve on sixteenth (14.125), as Rosberg complains of "pull to the right". The German is currently eleventh.

With twenty-three minutes remaining, pace-setter Hamilton prepares to leave the pits. Meanwhile, Sutil gets all out of shape and takes to the grass.

As Massa follows the example set by Sutil, Raikkonen begins a hot lap, posting a personal best in the first sector. Meanwhile, Hamilton goes quickest in the second sector, but fails to improve. In the Honda garage Barrichello is clearly unhappy, he remains twenty-first, almost 2s off the pace.

Rosberg enters the pitlane and immediately grinds to a halt. It is unclear what his problem is.

Davidson, on the harder option, goes eighth, crossing the line at 13.148. Rosberg has made it back to his garage and admits that he's "struggling at the rear", he also asks for the car to be lowered.

Fastest through the speed-trap is Webber (again) at 333 km/h, followed by Coulthard, Speed and Liuzzi. In terms of laps, Vettel and Albers have completed the most, both on 18.

Sato and Vettel are on strong laps, both setting personal bests in the first sector. The German is quickest of all in the second sector, finally crossing the line at 12.321 to go quickest. The 19-year-old was on the softer option.

As Liuzzi goes sixteenth (13.739), Schumacher fails to improve on sixth. In the Honda garage Barrichello stares at his monitor, probably failing to believe what he is seeing - that's he's twenty-first of twenty-two.

The Red Bulls have the top speed, but are clearly struggling in the infield section, consequently, Coulthard is currently thirteenth and Webber seventeenth.

As Massa begins a flying lap, Trulli has a moment, but somehow keeps it under control.

Massa posts a personal best in the first sector, and again in the second, however, he goes wide and on to the grass, ruining what would have been a very good lap. He's on the softer option.

Fisichella goes quickest in the first sector, as Raikkonen goes fourth (12.692). The Italian crosses the line at 12.710, which puts him fifth, ahead of Massa, but moments later Kovalainen goes fourth.

All eyes on Alonso, who goes quickest in the first sector. At the second split he's 0.064s up on Vettel, and by the line he's 0.171s up on the German, taking the top spot.

The timing screen in lit up like a pinball machine as the drivers make their final runs, most of them on the softer option.

A minor mistake sees Hamilton abort his final run and dive back into the pits, the Englishman having to 'settle' for third behind Alonso and Vettel.

Which sets things up nicely for qualifying.