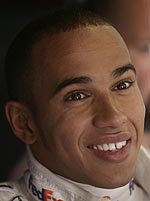 At the same time as building up Lewis Hamilton, certain sections of the media have been taking every opportunity to snipe at his teammate, Fernando Alonso.

In recent weeks, the young Spaniard, who until a few races ago was seen as a breath of fresh air following years of Michael Schumacher domination, has been cast as the villain of the piece. Sometimes the comments are subtle often they are not.

We have read of "war" within the McLaren team, "hostility" between its drivers, with the two time World Champion seemingly "angered by" the arrival of the young pretender, the precocious up-start.

Despite assurances from the Woking team and the two drivers, sections of the media insist that there must be friction, that two such talented driver could not possibly work harmoniously side-by-side.

Therefore it came as no surprise when a Canadian journalist Rob Martier of Montreal-based CJAD Radio tried to get the real dirt on the Hamilton/Alonso relationship, starting off by attempting to prove that the McLaren duo is not as chummy as they would have us believe.

"Fernando didn't have the best of days," said Martier, "but at this point do you even care?"

"Of course," Lewis hit back, clearly surprised by the question. "That's a bit of a silly question to be honest," he continued. "He's my teammate, I've got a lot of respect for him and we're quite good friends.

"At the end of the day we are a team," said the race winner, "we both want to finish at the front. I don't know what happened in his race but we need to have a look and it's not good for him obviously."

Determined to get a story, Martier persisted: "You say that you are team-mates and you care about each other, but that doesn't always seem to be the case.

"So what might this do to the relationship from here on?" he asked.

"When does is not appear to be the case?" asked the race winner, clearly incredulous.

"It's just my perspective," admitted Martier.

"Ok, me and Fernando..." said Lewis, slowly and purposefully, as though speaking to a child. "He's extremely professional and for me, coming into the team, I've got a huge amount of respect for him and I think he's grown to get on really well with me.

"At the end of the day he's the two-time world champion he'll bounce back without a doubt and I'm sure he'll be extremely quick in the next race."

Thankfully Martier got the point, and didn't ask; 'yeh but apart from all that do you really hate one another?' However, it's only a matter of time before another journo tries the same thing.

One thing that occurred to us was that despite the eulogising in the British media in recent weeks, representatives of the British media didn't ask a single question in the official press conferences on Saturday or Sunday. Perhaps they were in a state of ecstasy, and therefore unable to speak or write.