Kubica to be released from hospital tomorrow 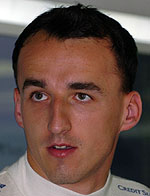 Contrary to reports elsewhere, Robert Kubica has not broken his legs.

The latest news from BMW is that the Pole will be released from hospital tomorrow (Monday), having undergone extensive tests following his horrific accident at the Circuit Gilles Villeneuve today.

No doubt race fans around the world will join Pitpass in sending Robert their best wishes for a full and speedy recovery and congratulations to BMW, not merely for building a car able to protect the Pole in such a horrific accident, but also the runner-up finish achieved by Nick Heidfeld, the best result ever achieved by the German team.