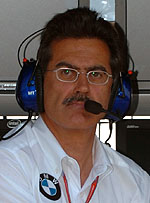 BMW team boss Mario Theissen is convinced that his team has resolved the gearbox problem which forced Nick Heidfeld into retirement at Barcelona, bringing his run of points finishes to an end.

"We managed to get to the bottom of the gearbox problem in Nick's car in Barcelona before the race day was over," revealed the German, "and corrective measures were already being applied during the test in Paul Ricard.

"We have also worked through Nick's botched-up pit stop and learnt the lessons for any future incidents," he added, referring to the incident which saw Heidfeld leave the pits without his right-front wheel nut in place, necessitating a painfully slow crawl round the track and back for a another pitstop, effectively ending any hopes of a points finish.

"In Monte Carlo it's a case of notching up a fault-free weekend and further cementing our third place in the constructors' standings," said Theissen.