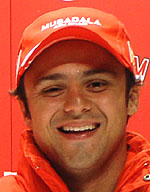 In his blog for Ferrari, Bahrain GP winner Felipe Massa looks ahead to this weekend's Spanish Grand Prix, while also shedding light on what he's been doing over the last few weeks.

"I have had a busy time since returning to Europe from Brazil, where I went after the Bahrain Grand Prix," writes the Brazilian. "The first appointment was back in the cockpit of the F2007 for testing at the Catalunya circuit where we race this Sunday. For me, it was a successful test as we have definitely made some improvements to the car, which was always planned for this first session after the opening three races outside Europe. The team has worked very hard and the reward is a good step forward, especially on the aerodynamic side. The actual results and lap times were good, but you have to remember that in testing it is quite difficult to get a really one hundred percent understanding of what the other teams have achieved. The most important thing is that we have made a step forward and this weekend we will see how it compares to our rivals.

"Apart from the new aero package, which includes a new engine cover, front wing and modified side pods, we have also come up with some changes to the mechanical side of the car, and that led to us seeing improvements in the set-up of the car. The aero package was the more significant change, but these other elements are also very important. The result of these changes is that the car is not only quick, but also more consistent.

"Last Sunday I went to Brisighella in Italy," he continues, "where I was presented with this year's Trofeo Bandini, which honours the memory of Lorenzo Bandini, who was also a Ferrari driver for much of his career. The award is very important and prestigious and many drivers have been given this prize, including Michael Schumacher, Fernando Alonso, Kimi Raikkonen and Jacques Villeneuve and it is usually given in the early stages of one's career and reflects also on how well you have done in the previous year's championship. I was extremely happy to accept it and I was given a very warm reception by the people in the town square for the ceremony.

"Life as a Formula 1 driver is certainly varied," he admits, "because the day before going to Brisighella, I was in Milan doing a magazine photo shoot with Dolce & Gabbana. But I don't think after that I will be planning a second career as a model! It was definitely different and it included a shot of me taken in a hotel room, wearing my race suit and playing on a Playstation.

"On to more important matters, I am looking forward to the Spanish Grand Prix. As you may know, they have modified the circuit and this will be the first time we actually race on the changed layout. I have to say from the point of view of just driving pleasure, the new version is worse than the old, because there are more slow corners and slow chicanes. That is not what we racing drivers like. But, I have to admit that from the point of view of making the racing exciting, for making a spectacle, it is a good idea, as there will be more overtaking opportunities at the end of the straight, as you no longer have a very quick corner. So for the show, I think it is better now. Of course, I can be optimistic about the Spanish Grand Prix: I won the last race, we had a good test at the same circuit that hosts the race and even though it is never easy to win races, I can be confident. Within the team, we just want to keep the momentum going forward and everyone is working very hard in every area to achieve that."