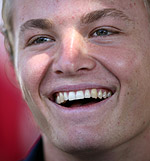 Despite Michael Schumacher's departure from F1, there is whole lot to keep German race fans following the sport. In addition to BMW, and the Mercedes powered McLaren team, there's Cologne-based Toyota, not to mention Nick Heidfeld, Nico Rosberg, Adrian Sutil and Ralf Schumacher. Indeed, many Germans are getting excited about the young prospects currently waiting in the wings, drivers such as Sebastian Vettel and Nico Hülkenberg, currently strutting his stuff in A1 GP.

With this in mind, it should come to hear that there is hot competition in Germany for broadcasting rights to F1 from 2008, with Premiere, Arena, RTL, ARD and Sat 1 all in the hunt.

Currently, while Premiere runs a pay-per-view-service which includes all practise sessions, while RTL has the rights to the race, qualifying and Saturday practice. RTL is understood to be paying around $100m a year, while Premier stumps up $60m.

The fierce competition between the various broadcasters is likely to be music to the ears of Bernie Ecclestone and CVC, who no doubt feared that following Schumacher's retirement German fans would bid auf wiedersehen to F1.