Toro Rosso is in the news 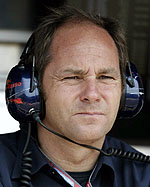 Toro Rosso's Gerhard Berger (right) is insisting that rather than use a Red Bull chassis, or its derivative in 2007, the Italian based team will build its own car, and is even planning a new factory.

With Toro Rosso using the 2005 Red Bull/Jaguar chassis in 2006, even though this is in contravention of the Concorde Agreement, it had been widely assumed that a similar strategy would be employed for 2007, though in this case the Italian based outfit would use the current Red Bull chassis. Berger says this is not so, and that his team will build its own car.

"It won't be derived from the Red Bull car," he told Italian magazine Autosprint, "and neither, as far as the starting point is concerned, from this year's Toro Rosso. "It will be a project carried out in house, on the basis of our experience."

Having secured the agreement of Ferrari, Toro Rosso will now use the Maranello company's powerplants next season, while 'sister' team, Red Bull, will switch to Renault. The failure to gain Ferrari's approval earlier, has cost both team's valuable design time.

Berger has also said that the team will need to expand its current facility at Faenza, or perhaps built a new purpose-built factory at (nearby) Forli, which has its own airport.

The Austrian has also played down speculation over the second seat alongside Tonio Liuzzi, which in recent days has been the focus of much discussion.

Although Scott Speed appeared to have kept the drive, there has been talk of Robert Doornbos being lined up.

Doornbos, having replaced Christian Klien at Red Bull for the final three races of the season, is managed by Christian Horner, who also runs the Red Bull Racing team.

Meanwhile, Klien is one of several drivers being linked with the test driver role at Honda, though the odds are that it will go to Gary Paffett.

Paffett, who was test driver for McLaren this season, is managed by Martin Brundle, who also looks after David Coulthard, who is a good friend of Gil de Ferran, who, among his other roles at Honda, has responsibility for driver recommendations.

What a tangled web.