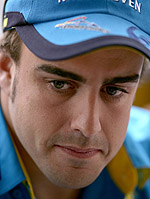 The World Championship fight has had some extra spice added to it with the news that Fernando Alonso has been relegated by five places to tenth on the grid.

As previously reported, the Spaniard was summoned to appear before the race stewards at Monza, after Ferrari's Felipe Massa claimed the Renault driver had blocked him in the final phase of qualifying.

"In Q3 on my last run, I came up behind Alonso who was also setting out on his quick lap," said the Brazilian. "I lost at least three tenths! It's a shame, because I felt capable of putting it on the front row.

"Fourth place is not so bad," he added, "but it's a shame I was unable to exploit the full potential available to me.

Having viewed video evidence and spoken to both drivers, the race stewards ruled that Alonso did impede Massa, contrary to Article 116b of the 2006 Formula One Sporting Regulations.

Although they agreed that Alonso's actions might not have been deliberate, they ruled that the World Champion should have his 3 best laps from the final phase of qualifying deleted, which dropped him to tenth on the grid, eight spots behind title rival Michael Schumacher.

To check out our Italy qualifying gallery, click here