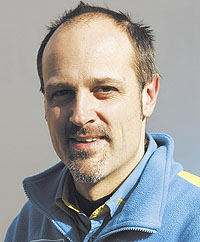 On the eve of another heavy test programme, this week at Paul Ricard, Renault's Chief Test Engineer talks in detail about how the adaptations demanded by the 2005 regulations.

Christian, what impact have the new regulations and testing limit had on how the team works?
Christian Silk: From a team point of view, the testing limit makes life very similar to how things were in 2003: we need to pay more attention to how efficiently we run the car, and be more flexible in our operations – that was shown last week in Barcelona when we made good use of the weather forecasts to bring our programme forward by a day. In terms of the regulations, they have forced us to do much more mileage – to get a representative idea of tyre and engine performance, we have to run a lot further than we did last year.

Has this limited the testing programme in other areas?
CS: It certainly means that we have less time to work on simple performance running – and that means the day’s final lap times from testing can be even more misleading than in previous seasons. The need to complete higher mileages means we inevitably compromise our performance work to an extent, but it is a question of balance. If we don’t understand the tyre performance properly at the end of a race, this can potentially leave us with a huge performance deficit at a Grand Prix – and that penalty would be more costly than the benefit of any set-up tweaks we might find in testing.

After the pre-season running, the test team know the R25 inside-out by now: what is your assessment of the car?
CS: First and foremost, it is easy to drive and to set up, which is an advantage for both the race and test teams. In general, the car is quick straight away at every track so we can immediately begin our programmes – which helps at the races in particular, because track time is very limited. Otherwise, the car has strong engine performance, good aero efficiency and works in harmony with its tyres. We have had some reliability issues in testing, but that is part of the philosophy of testing: running high mileages to find problems on the car and solve them before taking the R25 to races. We worked hard on chassis and engine reliability pre-season, and so far, it has paid off.

How quickly is development progressing with the R25?
CS: From the first tests, we have putting new parts, and more performance, on the car – as well as implementing reliability fixes. We have an intensive development programme and things are progressing very smoothly: new aero parts have been working well on the car, and showing the expected benefits. Our other asset has been that we began running with two R25 chassis very quickly – at the second test of the R25 in fact. I think that has brought a measurable advantage in terms of problem solving, development and understanding the car.

Operations seemed to have stepped up a gear in every department – what impact does that have on the team?
CS: The entire team is pushing very hard at the moment – there is a buzz around the factory and at the track because we know the car is competitive. Everybody is putting in that little bit extra – working through the night when they need to in order to get the job done. At the last test, we lost an entire day of preparation when we chose to bring the test forward, but the team responded brilliantly and on Tuesday morning, both cars were running. The team is getting the job done, and we can see that reflected in the results at the races.

The team will run this week at Paul Ricard – what will you be concentrating on?
CS: We will be testing tyres for Imola, looking at some set-up work over the kerbs and then conducting our usual longer-term R&D programmes. One product of doing so much reliability running so far in testing is that we are still finding set-up directions on the car that we have not yet explored. There were some promising items from the last test, and will work on these this week at Le Castellet. Set-up time is so limited at the races this season that the directions we explore now pay real dividends when the drivers arrive at the Grand Prix.