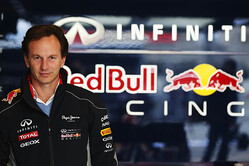 In the wake of Bernie Ecclestone's suggestion that he would like Christian Horner to succeed him as F1 supremo, Red Bull has issued a brief statement.

Following recent comments in the press about the future of Christian Horner, he would like to reaffirm his commitment to Infiniti Red Bull Racing, who he has a long term contract with.

Christian said: "While Bernie's comments in the press are very flattering, I am fully focused on my role as Team Principal with Infiniti Red Bull Racing. I have a long term contract with the Team and have said many times that there is only one Bernie Ecclestone. What he has done for Formula One is incredible and in my opinion he is irreplaceable."