Wolff has "no concrete plans" to sell Williams shares 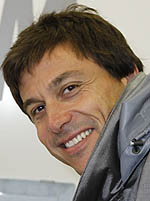 Most of the Formula One world was stunned by last week's announcement that former Williams director Toto Wolff had taken over as Mercedes' head of motorsports. One of the most surprising aspects of the announcement was the fact that Wolff is retaining his 15.4% stake in Williams. At the same time it is understood that he will be taking a 30% stake in Mercedes-Benz Grand Prix (MGP). This raised one big question and it wasn't lost on the world's media.

Phil Savage, publisher of trade magazine SportBusiness International, wrote on Twitter that "Toto Wolff's switch from Williams to Mercedes is a curious #F1 story. How can there be no conflict of interests?" The question also crossed the mind of Reuters' renowned F1 correspondent Alan Baldwin who wrote "asked about a potential conflict of interest, with Wolff holding shares in two competing teams, a Mercedes source said one role was executive while the Williams involvement was purely as an investor." So what is Wolff's view on all this?

Writing in the Daily Telegraph, Pitpass' business editor Christian Sylt reveals that Wolff has no plans to sell his stake in Williams despite concerns that it leaves him open to allegations of conflict of interest.

"I have no concrete plans to sell the [Williams] shares," says Wolff. "I am going to handle my shareholding carefully. That means looking at all options and alternatives whether Frank Williams buys them back, any of the current investors buys them back or I hold them as long as I think it is acceptable and feasible from a corporate point of view."

Retaining the shares seems to be the best decision for Wolff to make regardless. If he announced that he was selling the stake on the open market it could cause the Williams share price to fall due to a large number of shares suddenly being available. Holding on to the stake maintains stability and shows that Wolff believes in the future of the team. Its shares closed on Friday up 1.7% to €24.40 which is roughly flat on the price it floated at two years ago.

"From a pure financial background I am very interested in staying an investor at Williams because it is going to be a profitable investment," says Wolff.

Charles Braithwaite, media and sports partner at City law firm Collyer Bristow says that Wolff's involvement with both teams exposes him to accusations of conflict of interest.

"Williams and Mercedes are direct competitors so, on a simple 'smell test' basis, many will think it does not seem quite right that a director of one should be a significant shareholder in another... With Wolff, this perception is exacerbated by the fact that a) his shareholding in Williams is as large as it is, and b) he has moved straight across from Williams to Mercedes and so is not just a shareholder in Williams but also an ex-director.

"It does not matter if Wolff acts with complete integrity and independence, or can legitimately claim in fact that there is no actual conflict of interest. There is still likely to be a perception of an apparent or potential conflict."

There is nothing improper about an individual owning shares in two F1 teams whilst being a director of one of them. F1's governing body, the FIA, does not forbid it and Wolff says that "if it is made public to both parties it is OK as from a corporate governance standpoint."

"One has to assume Wolff and Mercedes have entered into this agreement with their eyes open," says Braithwaite adding "Wolff must be confident he has no restrictive covenants that would limit or prevent him from moving to Mercedes, and also that his continuing shareholding in Williams will not put him in breach of any contract he has signed with either entity.

"And Mercedes must be fully aware that Wolff has a substantial interest in a competing team but clearly feel that the benefits of his recruitment outweigh any potential conflict. They must also have checked that there is nothing in their company's constitution, or any contract or code they may have signed up to, that prevents them from appointing someone with a shareholding in a competitor as large as Wolff's."

Although there is nothing wrong with the situation, Wolff acknowledges the dilemma it could create. "There could be situations where as a director of MGP I have to take decisions which could be detrimental to Williams. They could be sporting decisions, contract decisions or decisions about broader politics. If that ever happens my duty is towards MGP because I am a director. I don't want to harm the Williams family and the people there but also I must abide by my duty. So I hope I can handle it but actually it is a very interesting point. It has to be watched."

Braithwaite says "there is nothing under the law preventing Wolff from continuing to hold shares in Williams while acting as an executive director of, and taking shares in, a competitor. The more important consideration here is not so much how this move is viewed from a legal perspective, but how it appears to the wider public (especially given the size of Wolff's shareholding) and how it reflects on the sport." Only time will tell how significant an impact this will have.