So Few Opportunities In F1 These Days 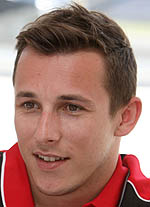 Happy new year! I hope you had a great holiday. I spent time with my family, eating far too much and enjoying the time off. December and January is always a welcome break for drivers but the training starts again all too soon!

A lot of the drivers will have had a couple weeks off but it's about this time when they start working with their trainers to get into shape for the season ahead. Some will go and train in the heat, while others will head into the mountains to exercise at high altitude.

The real action starts in just two weeks. Pre-season testing is a critical time for teams and is something everyone looks forward to, from the designers and drivers, right down to the mechanics. It's the most exciting time of the year.

It's also the first chance to see how the new car has turned out, and after just a few laps the team knows what lies ahead. If the car is good the team spirit will be high, but if the car is bad it will mean a lot of development work at the factory and a long year.

I always thought a good car was one that was stable at the rear end. After a few laps, if the rear end was stable and predictable, my confidence in the car improved and I began to look forward to a good season. If the back of the car is nervous it typically means the car lacks downforce, and while some drivers are able to live with a slightly nervous car, a lot can't.

Mark Webber and Sebastian Bourdais - who I drove alongside at Peugeot - are two drivers who like a strong rear end, while Sebastian Vettel is able to handle a car that moves around a little bit more. Vettel is comfortable in a car in a wider range or scenarios than Mark, and at times that could mean something like half-a-second a lap. That's why this time of year is so important, and so exciting, because drivers have the chance to develop the car towards their own style.

In testing, teams will begin by looking at engine mapping and aerodynamics, repeating tests they did in the wind tunnel to validate their data. The test drivers might also get a turn in the car, but more so they can compare what they do in the team's simulator to real life.

From there it's important that the race drivers get in the car and push, but at the same time are consistent. Consistency is the key, because it gives the engineers good data, and that's why keeping the same driver line up is a benefit for teams.

It's also why I think Ferrari signing Pedro de la Rosa is a good move. He is very experienced and is a very good test driver. I think most of his time at Ferrari will be in the simulator rather than the actual car, but I wouldn't be surprised if he gets a few laps during pre-season. That will allow him to help the team get through its testing programme over race weekends, and be able to compare the simulator to the real thing more easily.

It is interesting that Force India and Caterham haven't confirmed their drivers yet. It seems a bit of a mess at Caterham, but I think it is because everyone is struggling for money. Marussia has shown that in recent days with Timo Glock, who is a very talented guy, losing his drive because of money.

I think Heikki Kovalainen is the best driver available on the market, followed by Glock, but neither have any money behind him like others seem to. Kovalainen is a brilliant qualifier, he used to out-qualify Jarno Trulli who was famous for being a qualifying specialist, and is very consistent.

A team's decision on drivers should be made on results, and Kovalainen and Glock have good records. If I was in charge I wouldn't hesitate in keeping either of them on for another season.

At Force India things are a little different. Paul di Resta is now quite experienced and can lead the team, so it can take a risk on a new driver.
Adrian Sutil seems to be the favourite but that feels like a backwards step. I'd like to see Jules Bianchi given a chance. Ferrari is looking at helping him find a seat in Formula One, and I think it would be a shame if that doesn't happen because he's a young guy with a lot of potential.

But that is really the problem a lot of young drivers face. It is so difficult to get to Formula One even with money because there are so few opportunities. A lot of great drivers never made it to Formula One because they ran out of money or they got there at the wrong time.

Formula One is too expensive, and lots of talented drivers are missing out because others can bring a lot of money to teams. These days without backing, or being part of a driver development programme like Ferrari and Red Bull have it's practically impossible. Even in one of those programmes there are no guarantees. In a lot of cases teams will take a slightly slower driver if he has the money.

Luckily for us we are guaranteed another exciting season of racing. With pre-season testing almost here all the teams will be launching their cars before everyone learns if they're going to have a good or bad 2013!