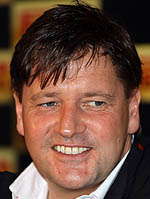 Pirelli is pleased with the feedback it has received from the teams after they sampled a prototype 2013 tyre on Friday.

The Italian manufacturer has been widely credited with adding spice to Formula One since it became the official supplier at the beginning of 2011. However, far from resting on its laurels the Pirelli is continuing development as it looks to introduce a softer range of tyres, similar to what the company did ahead of the 2012 season.

"It'll be pretty similar to last year; you'll move down a level," Hembery explained of the company's 2013 tyre range, "but this time we won't be keeping the super-soft, even that's going down as well. On the street circuits even that (the super-soft) was lasting forever with the current cars."

Friday's running was important as it afforded both the teams and Pirelli the opportunity to understand the 2013 tyres new construction. While teams ran varied programmes and some drivers complained of overheating in the prototype rubber it provided a good insight in to how the new tyres react.

"Warm-up was quicker, which increased thermal degradation but we've seen that as well that this afternoon with the current tyre," Hembery explained. "The majority of the quickest times were done on the new tyre. The comments back were that mid-corner traction has improved, which is what we were aiming to do."

Pirelli's current contract with Formula One runs until the end of 2013.