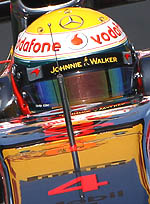 Last month Pitpass teased that one of America's best-known brands is looking in to sponsoring Formula One and anyone with a sharp eye will have been able to guess which company we were referring to from the headline of the article.

The article was entitled 'waiting for the real thing' in a nod to the famous slogan of American company Coca-Cola which referred to the drink as 'the real thing'. This has now been confirmed in an article by Pitpass' business editor Christian Sylt in today's Express which exclusively reveals that the drinks company is considering sponsoring F1 and if it joins the sport McLaren could be its home.

McLaren was dealt a blow earlier this week when it was reported that its title sponsor Vodafone, which pays the team an estimated £48m annually, is reviewing its involvement with F1. Vodafone first became an F1 sponsor in 2002, when it joined Ferrari, but switched to McLaren in 2007. In 2010 it renewed the deal until the end of 2013 and, faced with a worsening economic climate, it has reportedly carried out an evaluation about whether to stay or pull out.

The reports about Vodafone considering its F1 exit followed news that it had pulled its support of Triple 8 Racing in Australia's V8 Supercars. The team is home to reigning champion Jamie Whincup and crowd favourite Craig Lowndes so losing Vodafone attracted a great deal of local coverage. However, in Australia the brand is only 50% owned by Vodafone Group with the other half held by Hutchison Telecommunications. In contrast, Vodafone Group itself has sole control over whether to renew its deal with McLaren so it does not follow that it is more likely to leave because it pulled out of Triple 8 in Australia.

If Vodafone does leave McLaren, Coca-Cola would make an ideal replacement. It is one of the world's most well-known brands and is a giant of sports sponsorship with high profile deals in both the Olympics and football's European championships. The Olympics deal alone costs it around £64m per four-year cycle but it is small change for the company which last year had profits of £5.6bn ($8.6bn) on revenues up 33% to £30bn ($46.5bn).

Coca-Cola has never sponsored F1 before but is believed to have come close in the past. In 2005 it was reportedly in talks with F1's boss Bernie Ecclestone about becoming title sponsor of the sport but in the end he decided that associating it so closely with any single company could damage relationships with other brands. "I would never do a title sponsorship for F1 because it screws up every race. It would be very restrictive," he told Sylt.

Coca-Cola is also understood to have come close to doing a deal with the Renault F1 team but that too never got off the grid though for a very different reason.

The drinks company has not yet made any announcement about whether it will get involved with F1 but Sylt discovered that the sponsorship division at its headquarters in Atlanta has spent over a month researching F1 itself, as well as other drinks sponsorships in the sport. The fact that the company has been getting data on specific drinks deals in F1 suggests that it has more than just a passing interest in the sport and it is also understood that Emmanuel Seuge, Coca-Cola's head of global sports and entertainment marketing, is personally involved with the process adding even more weight to this.

McLaren's F1 cars currently carry logos of energy drink Lucozade but it is not thought that this would be an obstacle to Coca-Cola because the deal is with its parent company GSK which could replace it with another of the brands in its stable. Likewise, McLaren's predominantly grey colour-scheme would not be a hurdle as it also has hints of red and white since they are Vodafone's corporate colours.

Coca-Cola's entry would be a bold endorsement of F1 which has been beset by bad news in recent weeks. Last month F1 had to delay its plans to float on the Singapore stock exchange due to market turmoil and a few weeks later its former chairman Gerhard Gribkowsky claimed in a Munich court that Ecclestone paid him a bribe in connection with the 2006 sale of the sport to current owner, private equity firm CVC.

One company which would possibly particularly dislike Coca-Cola entering F1 is energy drinks brand Red Bull which owns last year's world championship-winners. Not only do the two brands occupy a similar space in the market but Coca-Cola also owns the Relentless energy drink. Likewise, Mercedes' sponsor Monster Energy and Caterham's energy drinks sponsor EQ8 would presumably not be overly impressed about Coca-Cola coming into F1.

What Lucozade, Monster et al may not realise is that they aren't going to achieve Red Bull-like levels of exposure and return on investment simply by slapping their logos on cars and drivers. No matter how successful the team is, no matter how big the logos are and no matter what promotion they do for the partnership, it will not guarantee that the drinks sponsor emulates Red Bull's performance in F1.