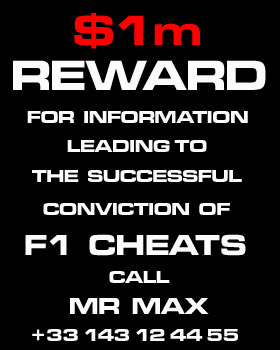 According to a report in a British tabloid the FIA is to give $1m to F1 insiders who tips it off about cheating following the recent in introduction of new regulations aimed at doing away with all hi-tech wizardry such as driver aids.

Such devices were banned before but the sport's governing body found itself unable to police the complicated software systems. One or two teams were subsequently accused of 'cheating' and consequently, unable to prove otherwise, the FIA withdrew the ban.

Now, as part of its moves to cut costs and put the racing back in the hands of the drivers rather than software engineers, the FIA has once again decided to ban all driver aids.

The scepticism over whether the FIA can effectively police the issue still remains therefore the sport's governing body is rumoured to be taking the drastic step of asking insiders to 'grass' on the cheats.

"The reward is genuine and will be handed to any person who gives us details of a team running an illegal system," a source told The Sun.

Meanwhile, according to Reuters another source says: "Driver aids cannot be used from 2004 but we are becoming increasingly sceptical of the teams' inability to switch off all launch control and other driver aids for the 2003 season. We are considering very heavy fines for any team found to be using illegal systems.

"In addition to our own technical inspections, we are also considering a $1 million reward for the receipt of any information which will lead to the conviction of a team found to be acting illegally. The FIA has already made it clear that we intend to work on a zero-tolerance basis."

In its efforts to raise much needed revenue, pitpass will today be calling FIA President Max Mosley regarding a story we heard last week from a guy in 'The Kings Arms' in Gerrard Street. This gentleman has a friend, who has a friend whose Uncle's barber knows the woman that works in the canteen at McLaren. Well anyway, according to her..