Williams loses nearly a third of its value in seven weeks 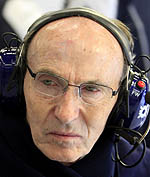 Pitpass isn't going to say we told anyone so but it was never a secret that we didn't think the Williams stock market flotation was a great idea. Today we learn in the Guardian, courtesy of an article by Pitpass' business editor Chris Sylt, that the price of Williams' shares has fallen by 27% since it floated just over seven weeks ago. It means that the team's valuation has literally fallen by £57.5m (€65.2m) to £156.1m (€176.9m) and it certainly hasn't fared any better on track.

Williams has had the worst start to its F1 campaign in its 33-year history and it still has no points after three races. It lies tenth in the standings and the best result scored by its drivers so far this year has been Barrichello's 13th place in the Chinese Grand Prix. Its shares fell 3.4% when they opened for trading the day after the race and over the past month they have lost 13.9% of their value. The shares closed at £15.61 (€17.69) before the Easter break, down from their offer price of £21.36 (€24.21).

The biggest casualty of the reversing share price has been Dutch investment firm Cyrte which was founded by billionaire John De Mol, of Endemol and Big Brother fame. Cyrte became the biggest single investor in the Williams flotation by buying 5% of its shares. The falling Williams share price has severely dented Cyrte's fortunes in F1 and its stake has lost a whopping £2.9m (€3.3m) of its value since it was acquired.

Williams itself has not suffered from the declining share price. The team did not issue any new shares in the float and instead the majority of the offering came from its engineering director Patrick Head who will be retiring this year. Head floated 14.5% of his shares in the team and thereby added around £31m to his retirement fund. The team has been left with a share price which gives a constant indication of its health. It is a decision which could have long-term implications.

Williams is arguably the second most successful F1 team with nine Constructors' Championships to its name. However, it last won a race in 2004 and since then it has lost a slew of sponsors as its performance spluttered. Over the past five years Williams has made total net losses of £31.5m and in the 10 months to the end of October 2010 its after-tax profit reversed 41% to £3.9m on revenue of £74.2m.

At the end of last year Williams lost a total of £20m in sponsorship according to F1's industry monitor Formula Money. Sponsorship consultant Julian Cottam says it may be tough for Williams to fill this gap as its falling share price is not a good advertisement for the team.

"I can't see any motivation at all for a brand to align with a team that has made such a fundamentally flawed decision," says Cottam, adding "Rather than sell Patrick's equity in the business to another individual or business so that he can effectively cash in his pension they have decided on floating these shares. I didn't see why Patrick Head was so determined to offload his entire stock in the business at a time when Williams has had a long period without any great success on track. Therefore, their stock is low at this time."

This is a point which Pitpass has made before as we stressed on 11 February that there is nothing wrong with Head wanting to cash in his chips but a public offering is perhaps not the right way to do this due to the public antipathy towards people who spend or receive a huge sum of money. The crashing share price could well be testimony to this.

One of the only other motorsport flotations has been that of the American single-seater series Cart. Although Cart is now part of the privately-owned IndyCar series, it floated on the New York Stock Exchange in 1998 and its then-chief executive Andrew Craig says "some buyers in an Initial Public Offering (IPO) hope for a quick rise in the stock price so they can flip the stock and make a quick gain. When the stock does not rise these same people quickly dump the stock and the price drops."

He adds that the allure of owning a part of a motorsport team soon fades off as the public "quickly realise that they are not really a team owner at all, they are still watching the race on TV and they don't have accreditation." This is not the case if a high net worth investor buys a significant stake in a team himself but it is a route which Head steered away from.

The decline in the price of Williams' shares could be reversed if investors start snapping them up in a buying spree since the more shares are bought, the fewer there are available so their price increases. However, Cottam suggests this isn't likely since "it's a long term investment at best and until a manufacturer gets into a partnership with them, not a very safe one."

He adds that "in the US, stocks have been taken up by sports fans in many franchises within the NFL, NBA, World Series etc for a good many years and more recently in this country with teams like Manchester United for example. However, these are mature businesses with a multi faceted source of income streams and the idea of fan-team ownership is something of a more mature proposition across the Atlantic."