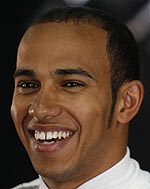 Although details are somewhat sketchy, it has been revealed that Lewis Hamilton is to drive a NASCAR car later this year, swapping seats with two-time NASCAR champion Tony Stewart.

Stewart-Haas Racing has confirmed that Lewis Hamilton will drive Stewart's No. 14 Chevrolet Impala while the American will get to try the Englishman's 2010 F1 car at the legendary Watkins Glen circuit in an event arranged by mutual sponsor Mobil 1.

The event follows a similar swap in 2003, when Jeff Gordon traded places with Juan Pablo Montoya, who was driving for the BMW WilliamsF1 Team at the time.

Organizers insist that both cars will be full-race versions and the respective drivers race crews will be on duty.

No date has been given for the event other than that it will hopefully take place "during the summer".