Mercedes off the pace, admits Schumacher 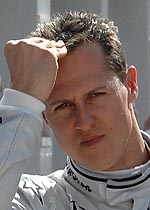 With just two more days of testing before the 2010 season gets underway, Michael Schumacher has admitted that his team is not on the pace of its rivals.

"We are not in the position we would like to be," the German told reporters at the end of today's session. "The main issue for now is not to be too far off," he added.

After three tests where the weather seriously compromised running, these final four days in Barcelona finally see the teams stretch their legs and perhaps give observers a chance to see the state of play.

Yesterday, teammate Nico Rosberg was 1.027s off Mark Webber's pace, while today, Schumacher was 1.075s behind pace-setter Hulkenberg. At both Valencia and Jerez the best Mercedes time was around a second off the pace of the leaders.

However, with the first race just two weeks away, Schumacher refused to be downhearted, adding: "There are no reasons to not talk about us being able to be competitive in the championship."