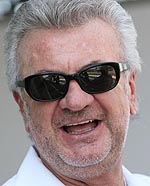 Michael Schumacher's manager Willi Weber has dismissed reports that the German was responsible for the disastrous decision to change Kimi Raikkonen to wet tyres too early in Sunday's Malaysia Grand Prix.

Reports in the Italian and German media suggest that the seven-time World Champion, an advisor to the Maranello outfit, made the decision to switch Raikkonen to wet tyres on the 19th lap of the race, a move that proved disastrous when it failed to rain with any sort of intensity until several laps later by which the Finn's tyres were no longer effective. In the few laps before the downfall began in earnest, the 2007 champ was losing as much as 20s a lap.

"The criticism aimed at Schumacher is totally idiotic," Italy's Gazzetta dello Sport quotes Weber as saying, while Ferrari too has denied the claims.

"The attack against Michael makes no sense," Weber continued. "He knows everyone and was in Sepang just by chance. The decisions from the pit wall were taken by the team.

Referring to reports that Ferrari is considering ending the German's contract, Weber admitted: "His contract ends at the end of the year, and I don't know whether it will be renewed. It's possible that his contract won't be renewed, but there will be a meeting midway through the year, so we'll have to wait.

"Should his contract not be renewed, then it would certainly not be because of the Malaysian GP," the German insisted. "Michael may give some advice to the team, but he is not the team leader nor the team manager at Ferrari."