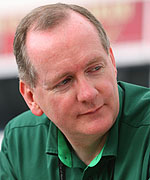 With each passing day bringing further bad news to the international motor sport community, and Formula One in particular, it's been hard to decide the point at which we knew things were getting really serious. I have been trying to pinpoint that pivotal moment when the global financial crisis hit Formula One so hard as to send us wheeling in the direction of the nearest drinks cabinet, shaking our heads in disbelief at the extent of the catastrophe.

Now, however, we know. Because when McLaren and Ferrari make up, start visiting each other's factories for a corporate love-in and tell the media that they are working together in harmony for the future of the sport, we know things must be bad. It's like Bill Gates popping in to Apple to say he much he loves the iPhone, oh and by the way he just adores the Airbook.

I think we all knew that the financial crisis which dawned in late 2007 was the hors d'oeuvre to the main course of a broader collapse in global business fortunes in 2008. Little did we know that this was going to develop into a mutli-course 'banquet for the damned', with industry sector after industry sector posting ever more depressing results, the car industry in particular imploding as sales and shareholder confidence disappeared faster than Lewis Hamilton off the starting grid.

With Formula One sponsors such as the Baugur Group, Credit Suisse and Dell disappearing, ING 'cutting back' - which probably means they wish they could cut and run - and the recent launches showing us that (a) the new cars fell out of the ugly tree and hit every branch on the way down, and (b) have more space available to explore than the USS Enterprise, it's no wonder that the future of Formula One seems even more difficult to imagine.

Back in the days when RBS was a successful bank, Honda had a Dream and a sudden contraction was something felt by women rather than the manufacturing sector, McLaren and Ferrari didn't like each other very much. One man, from Ferrari, apparently popped their secrets into his briefcase and offered them to another man, from McLaren, whose wife nipped down to the local photocopying shop and kicked off the biggest scandal in recent F1 history. One that made Ferrari appear bitter, damaged the reputation of McLaren - unfairly in my opinion - and ultimately cost them one hundred million dollars.

Now however, that's all forgotten. What's one hundred million dollars between friends, after all, when you've both just realised that fighting each other is the least of your worries.

In his interview on the Official Formula One web site this week, Ron Dennis gave a typically comprehensive response to the questions, including the statement that, "I firmly believe that the business model of a Formula One team operating as a financial entity on its own is an anachronistic one. It used to work, but it won't work in the future."

Hmmm. Interesting statement that. If you read further, you'll see he believes that a team should either be subsided by a car manufacturer or billionaire as an 'entity' that presumably does not really make money, or else is part of a group - like McLaren or Ferrari - which Does Other Things That Make Money.

So there we have it. Formula One teams cannot stand on their own two feet unless subsidised to win by a car manufacturer or crazed billionaire who has forgotten how he made a billion in the first place. Not much of a future for the sport is it?

A Formula One team should really be an asset. Something that makes money, given that your team is one tenth or thereabouts of a multi-billion dollar sport that still produces vast global TV audiences and generates fascination for hundreds of millions of fans. So when someone of Ron Dennis's acumen states that 'independent' teams are an anachronism, it really is time to take stock of where we are - and where we will be in the coming years.

I remember Eddie Jordan's speech at his car launch in 2000 warning against the dangers of car companies buying F1 teams, pointing out that their involvement would only last as long as it suited their commercial needs and the patience of their shareholders. His comments came about specifically because of Ford's purchase of Stewart Grand Prix and the creation of Jaguar Racing. Honda, too, was starting its partnership with British American Racing (remember them?), one which would lead to its eventual take over of the team in 2004.

Both companies are now gone. Ford withdrew with a whimper at the end of 2004 thanks to people in Detroit who knew the cost of everything and the value of nothing, while Honda is the most recent casualty. Everyone now seems to spend his time trying to figure out who's next. Is it Renault as a result of its share-price collapse? Toyota after posting its first ever loss and having to revise its forecasts in a significant downward direction? Only Mercedes, Ferrari and BMW seem to have the unwavering commitment of their car-backers, and it's not difficult to see why; you are at the front, get most of the TV coverage, the lions share of the TV revenue and are the first port of call for any new sponsors evaluating the sport.

But Formula One cannot be contested by three or four manufacturers and an energy drinks company. It's just not that interesting, it doesn't allow for a proliferation of new drivers, new nationalities, new sponsors, new blood.