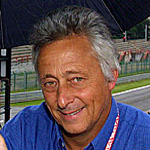 What did you think of that, then? The two championship contenders collide and through it all sail Messrs Kubica and Alonso, who swap places after the first stint and go on to claim the two top steps of the podium. Meanwhile both championship contenders are penalised and one of them scores a couple of points which keep the championship well and truly alive and the other one is out of it altogether.

You have to agree that it's a lively championship, but Raikkonen's inability to really challenge and overtake Kubica seems disappointing, and once again, the Ferrari wasn't really on the pace - at least, not the pace that it should be, nor with the necessary consistency.

It's great stuff for Renault at a circuit where the long straight should have penalised them. As Kubica pointed out, if Piquet hadn't made a mistake in qualifying, he might have also made things difficult for the Ferraris, BMWs and others.

And both Kubica and Raikkonen said, their championship hopes were being kept alive by that well-known philosophy 'anything can happen.' Admittedly one has seen evidence that it certainly can over the last few races. Nigel Mansell often used to say that and he knew it clearly enough: what ever that anything was usually happened to him.

But the prospect of a continuing title fight remains and who could wish for more. Who would have imagined that 1) a McLaren engine would blow, 2) that Lewis would finish but not score, and that 3) Massa would only scrape into the points? Lewis is very good at putting these things behind him and while one agrees that one has to move on and think positive, it is important that one has to learn and then move on, i.e. learn not to do it again, and then move on.

An evening with the lads from a well-known motor racing magazine meant that I didn't approach race day in the best possible frame of mind. I'm just reminded that during the evening we phoned one of their colleagues who happened to be at Wembley. A partial transcript of the call goes like this: "champaaaaaaaaaaaaaaaaaaaaaaaaaaaaaaaagne…"

However, in comparison to a morning in Europe with Porsches, GP2 and the drivers' parade, a morning in Japan is a lot quieter, given that there was a Nitz Vitz Cup race (or something like that) plus a round of the local Porsche Cup which included a pair of brothers who seemed to enjoy battling with one another, and someone called Dragon.

Talking of driver names, I'm reminded of my first visit to a sports car race here at Fuji many years ago. Finishing in eighth place or thereabouts in a Toyota were the curiously named pair of Kamiya Iwanalaya and Oneri Wenyapami (say it out loud, preferably away from female company).

Oddly enough, this pair only appeared in the Autosport report and one or two obscure publications in Europe, due to them being the figment of the addled imagination of your humble correspondent and the then editor of that well-respected aforementioned magazine, wiling away their time in the back of a bus on the way to the airport on Monday morning.

Unfortunately, it seems that the editor of a bible devoted to sports car racing has copied the results out of Autosport, so our pair have been immortalised in the history of sport car racing. (Motoring News's correspondent thought it was a silly idea and refused to play the game.)

Another memory from that era was meeting my local commentating colleague. In many cases, the amount of English spoken by some foreign commentators just about matches my Japanese. But in this case, the slightly elderly chap came up with magnificent English - if slightly dated. He reminded me of the Japanese flier Yamamoto in Those Magnificent Men in their Flying Machines, played by Yujiro Ishihara but whose frightfully English voice was dubbed by James Villiers. It transpired that my colleague's dated vocabulary came from living in Oxford where his father was a Japanese lecturer 20 years earlier.

His modern equivalent is obviously an icon, because he announces about three things per day, in a very slow, heavily laden American accent. Apparently the Japanese are particularly fond of such an accent, even though it sounds utterly ridiculous to native English speakers. The Japanese commentator, meanwhile, has a massive range of grunts and growls with which to agree to his co-commentators. It's an odd place.

So now the race is over, where to next? Some guys have already left the circuit, heading for Tokyo where they will stay until Wednesday, a Beatles bar being a particular favourite. But, as I mentioned earlier this week, some people have other ideas. I can now reveal that Brit journalist Tom Clarkson with photographer Lorenzo Bellanca is heading up Mount Fuji at midnight on Sunday with Alex Wurz and Sebastian Vettel, to greet the dawn, as part of a feature for F1 Racing. It seems that this slightly crazy way of life is mildly contagious…