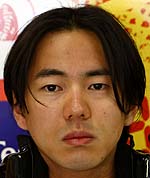 ART Grand Prix has announced that they have made the decision to terminate Luca Fillipi's contract with immediate effect.

Yamamoto contested 7 Grands Prix in 2006 with Super Aguri, the Japanese team having dropped Franck Montagny who was replacing Yuji Ide. In 2007, he re-emerged in F1, this time replacing Christijan albers at Spyker.

In February this year, Yamamoto was unveiled as one of three test drivers for the Renault F1 team, the others being Romain Grosjean and Lucas di Grassi, however, to date, the Japanese driver has yet to test the French outfit's 2008 car.