An OBE for John Surtees 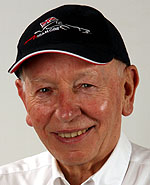 1964 World Champion John Surtees has been awarded an Order of the British Empire in the Queen's Birthday Honours list, announced today. The award is in recognition of his services to motorsport and charity.

Surtees, who won his title with Ferrari, remains the only man to win the World Championship on four as well as two wheels - having won seven titles in the 350cc and 500cc classes.

Having made his F1 debut with Lotus in 1960, Surtees was to driver Coopers and Lolas before joining Ferrari in 1963. Like many Ferrari drivers he had a difficult relationship with certain people within the organization, though not founder Enzo Ferrari, and quit the Italian team after two races of the 1966 championship… a season that many regard as being his finest.

He subsequently spent two seasons with Honda, scoring a sensational, and highly emotional, win at Monza in 1967, then one season with BRM before forming his own team (Team Surtees) in 1970.

Other than bikes and F1, Surtees was outstanding in Sports Cars, enjoying wins at Sebring, the Nurburgring and Monza. However, he was lucky to survive an accident at Mosport in 1965, while running his own Lola T70. Even so, he spent many weeks in hospital recovering form the serious back injuries he incurred.

A highly knowledgeable engineer, and a man who doesn't mince his words, Surtees is rightly regarded as one of the true legends of motorsport.

While Pitpass is delighted to see 'Big John' finally receive recognition, we cannot help but feel that he was deserving of something a little more 'substantial' than an OBE.