Alonso gets an 'official fan' 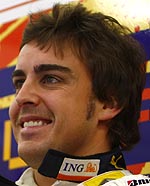 While F1 fans in Britain will no doubt be aware that 30-year-old Lee McQueen last night heard Sir Alan Sugar says those magical word 'you're hired' in the final edition of The Apprentice, they might not be aware that in Spain a 23-your-old race fan has landed his very own dream job.

The youngster, who previously enjoyed F1 as a hobby, providing pictures from various Spanish tests for local websites, is to travel with Alonso to very Grand Prix for the remainder of the season, earning 3000 euros a month in the process.

Álvaro, was one of 36,000 race fans who applied for the job, the brainchild of Renault sponsor ING.

As part of his duties, Álvaro will record details of his travels on a special blog