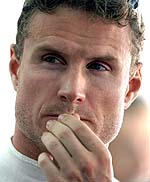 David Coulthard has become the third driver to be penalised for changing his gearbox in Monaco.

Following the (five place) grid penalties dished out to Sebastian Vettel and Giancarlo Fisichella, the Scotsman has been hit with a similar punishment after changing the gearbox on his Red Bull following his 185 mph crash in the second phase of qualifying yesterday.

The exact cause of Coulthard's accident is not yet known, however, the Scotsman said: "When I hit the brakes the car turned, I was going over a rise so it's possible I locked the rear axel, but normally when that happens, you can just release the brake a little bit.

"It's normal for the rear to go light when you brake there," he added, "as we don't have engine braking or anything like that, but you drive with that in mind, so I'm surprised what happened was so violent."