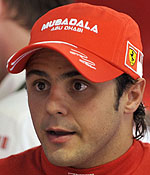 FIA President Max Mosley, who had made it his personal mission to try and make F1 safer and less costly, will be dismayed to hear that at least one leading driver is unhappy with the rule changes proposed for next season, warning that they will lead to more accidents.

Speaking at the end of a three day test at Barcelona, Ferrari's Felipe Massa admitted that he was unhappy having run without traction control, one of the driver aids banned next season.

"The fact is I didn't have any experience without traction control," the Brazilian told Gazzetta dello Sport, "and I was rubbish. First, the accelerator is like a button. You have to be as soft as possible. But from a safety point of view, these limitations on the use of electronics seem a step backwards. In wet races we will have a lot more accidents."