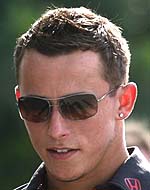 One year after joining the Honda Racing F1 Team as Test and Reserve driver, Christian Klien has reached an agreement with the team management to be permitted to pursue a race drive with another team for the 2008 season. As a result, Christian will move on from his role supporting Jenson Button and Rubens Barrichello at Honda. He is focusing all his efforts on specific opportunities to race in 2008 and will begin by testing for the Etihad Aldar Force India F1 Team in Barcelona next week.

During his year with the Honda Racing F1 Team the 24 year old from Hohenems, Austria, undertook testing and development work with both the Honda RA106 and RA107 cars and attended every round of this year's FIA Formula One World Championship to work with the engineers and support the drivers. However, as a result of the new regulations limiting testing, Christian requested the Honda Racing F1 Team to allow him to pursue a race seat in Formula One, which included testing for the Etihad Aldar Spyker team in Spa-Francorchamps in July.

"I have really enjoyed working with the Honda Racing F1 Team this year and would like to thank them for giving me the opportunity to work with them and provide support to Jenson and Rubens," said the Austrian. "My goal for 2007 was to work with a team like Honda, and it has been a really great experience. Honda is an outstanding company and their Formula One team deserves to succeed. I would like to thank everyone in the team for their help and support."

Explaining the background to the agreement, Christian said; "Due to the limited testing available during the season, however, I have decided to focus my efforts on specific opportunities to race in 2008 in Formula One, and my immediate goal is to complete a successful test for the Etihad Aldar Force India F1 Team in Barcelona next week. Naturally I am concentrating on racing – that comes first.

"Considering the way in which younger drivers have performed in this year's Formula One World Championship, including those whom I have raced against and beaten in lower formulae, I am very happy with the interest being shown in me. I still have a lot of work to do in order for everything to work out the way I want, but following the agreement with the Honda Racing F1 Racing team I am now in a position to give other opportunities my full commitment, commencing with testing for the Etihad Aldar Force India F1 Team."