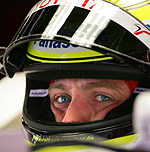 We hear that Ralf Schumacher has been given a stark ultimatum by his team bosses at Toyota, improve or you are out.

Indeed, we understand that the German driver has just two races to up his performance or face being dropped by the Japanese team in favour of Kazuki Nakajima, currently competing in the GP2 series with DAMS and as test driver with Williams.

The story of the two race ultimatum first broke in the German publication 'Bild' which has a long reputation of sensationalism, to put it mildly.

However a Toyota source has confirmed to Pitpass that Ralf has to improve his performance in the next two races - Canada and the United States - or he will be dropped by the team.

Our source added that the German is under intense pressure at present not only from his employers but from the German media, which is still smarting following the departure of his brother. In the absence of Michael Schumacher, the German media finds itself having to rely on Nick Heidfeld achieving success.

The German has had a dismal season, certainly compared to his teammate Jarno Trulli. In Monaco the Toyotas were nowhere to be seen, but Ralf, in particular, had a dreadful weekend, failing to get through the first phase of qualifying, then finishing sixteenth (of eighteen) in the race, albeit one place behind Trulli.

After five races the German has one point to Trulli's four.

With Schumacher one of the highest paid drivers on the grid, and Toyota keen to put the nightmare of 2006 behind it - having had to publicly apologise for its dismal season - there is already intense pressure on the team to improve this season, particularly in light of the fact that it is being headed in the Constructors' Championship by Williams, to which it supplies engines.

There has already been intense speculation over Schumacher's future as his contract with Toyota ends this year. Should he be dropped by the Japanese team it would have a highly negative effect on his worth.