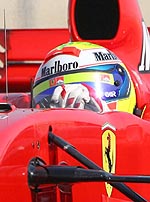 On a day overshadowed by a heavy crash involving Renault's Heikki Kovalainen, the Ferrari duo of Felipe Massa and Kimi Raikkonen dominated proceedings, posting the fastest times of the day as they both completed race simulations.

The Finn was using a new aero package, which Felipe will use tomorrow, as the Italian teams looks ahead to Melbourne, which is just over two weeks away.

Between them the Ferrari drivers completed 197 laps, but it was the consistency of the (fast) lap time that will have worried their rival.

Fernando Alonso finished third quickest, albeit 0.59s down on Massa, with teammate Lewis Hamilton finishing fifth, a further 0.4s behind. The Spaniard worked through the day's plan of Bridgestone Potenza evaluation and set-up options without any problems, completing a race distance in the afternoon. Unfortunately, the Englishman's (similar) programme ended two hours early when he stopped on track with an oil leak, causing one of today's numerous red flags.

Splitting the two Woking drivers was Robert Kubica in the BMW, the Pole finishing 0.848s down on Massa.

Kubica did some set-up work in the morning session and concentrated on long run simulations with different mechanical set-ups after lunch. Meanwhile, Sebastian Vettel had to spend a lot of time in the garage due to a gearbox change in the morning, and a power steering change and problems on the hydraulic system in the afternoon. Not the best of days for the German youngster.

For the two remaining days Kubica and Nick Heidfeld will share driving duties. The programme for tomorrow is aero tests and testing of new mechanical parts for Robert. While Heidfeld's 'to do list' includes set-up work, aero and tyre tests.

"There are still some problems that are annoying us," admitted Kubica at the conclusion of the session, "so we have to find some compromise between reliability and performance before the start of the season as there is not anymore testing after this. We came here because the weather is good and this test is crucial to us but unfortunately the problems are still there, we have had these problems a long time so the first lot of Grand Prixs for us will be difficult. I feel much better this season as I'm suited to the car now and the team so much self confidence is much stronger."

Giancarlo Fisichella focused on completing a race distance this morning, which was eventually completed in spite of a delay owing to a mechanical incident. Subsequently, he focused on set-up work aimed at improving the car balance. By the end of the day, the Italian had completed 81 laps, and finished sixth on the timesheets.

On the other side of the garage, teammate Heikki Kovalainen endured a difficult day. After his programme was delayed by minor technical problems during the morning, he then crashed heavily just before lunchtime.

He walked away from the accident unhurt, but the car was severely damaged, preventing him from running again during the afternoon. Repairs to the car are now underway, to allow Heikki to resume his programme as soon as possible.

"I am pleased to be back in the car for this final test session of the winter," said Fisichella. "It's an important session for me, because it will give us all a good feel for things ahead of Melbourne, and allow us to complete our final preparations. We have a lot of work to do and today was a good start for the rest of the week."

"I had a pretty big accident today," admitted Kovalainen, in a masterpiece of understatement. "I got caught out in turn seven and the car hit the barriers quite hard. All the safety systems worked perfectly so I am fine, but there is quite a lot of damage to the car and I may not be able to start running again until tomorrow afternoon.

"That will delay our programme, which is frustrating," he continued, "but the focus now is on working with the team to get the car ready as soon as possible. Once it is, I will be 100% concentrated on completing the rest of our work. We are already in a good position after running for three days last week, but there are still some important preparations to be completed before we get to Melbourne."

"For the team, today was all about getting back in the groove after our short break," said Test Team Manager Christian Silk. "With Giancarlo, we concentrated on race distance work before starting to work on the set-up, which gave some good results. Heikki's day was obviously interrupted by the accident. We were pleased to see him walk away unharmed, and the car did its job in protecting him. We hope he will be able to continue with his programme tomorrow."

In a separate incident, Ralf Schumacher jarred his back when his car ran over the kerbs. Feeling discomfort, despite a massage, the decision was taken to allow the German to 'stand down' for the remainder of the day, his car being taken over by reserve driver Franck Montagny.