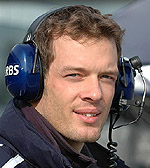 WilliamsF1 has announced that it has concluded its driver line-up for the 2007 season and has appointed Alex Wurz (right) and Nico Rosberg as the team's race drivers.

The Wurz/Rosberg pairing is the perfect driver combination to spearhead the team's shift to Toyota power in 2007, with both the technical challenges and the opportunities this transition presents.

Commenting on today's contract confirmations, WilliamsF1's Team Principal, Frank Williams said, "2006 has been a pretty tough season so far and all three of our drivers have proved to be enormously resilient and committed. However, we are seeing the beginnings of a performance upswing which we are determined to maintain. Together with our recent announcement regarding our Toyota engine partnership, we are starting to put in place some of the cornerstones of a competitive team for the rest of this season and into the future."

In relation to Alex's appointment, Frank said, "Alex brings us important technical continuity and understanding of the car and as well as being an excellent communicator with our engineers, he is ultra-competitive during the Friday ‘full tank' practice sessions. Alex will be a great racing driver for us as he is one of the few men I have seen in a wheel banging confrontation with Michael Schumacher and come out on top!"

Williams continued, "Retaining Nico for next year was not a tough decision. He has shown great promise so far in his debut season and I know he will build on this with
every race. As much as taking great pleasure in confirming Alex and Nico for next season, I must also commend Mark Webber for his contribution to the team over the past two seasons as he has been a credit to himself and Williams and has never let up in his pursuit of competitive success. I know Mark will give his all until the end of the season and we wish him well in his future arrangements."

Alex Wurz responded to his appointment with delight. "My natural habitat is racing, so I couldn't be happier to have received Williams' vote of confidence for this job next season. Of course I know the team well having been a part of the race programme at every Grand Prix this season, but now my role takes on additional responsibility and I am really looking forward to this."

For his part, Nico Rosberg said, "Stability and continuity are very important for me in the early stages of my Formula One career, so I am really pleased that we are now set for next year and that I will continue to work with Alex. I have learnt a lot from the team and I hope I have contributed my fair share too, but now we have the basis to step it up for the remainder of this season and next."