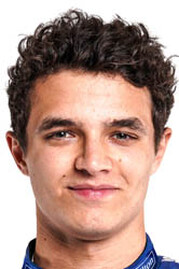 Starting in karts in 2008 at the age of 7, a year later Lando claimed pole position at his first national event and to-date is still the youngest driver to ever get pole at a national meeting. Despite early season mechanical issues, a subsequent switch to the Mick Barrett Racing team and a Tony Kart chassis allowed him to beat drivers vastly more experienced.

For 2010, he entered the two main national championships in the cadet class racing against drivers up to three years older. Undaunted, a series of podium results and a string of pole-positions – more than any other driver that year – saw his reputation rise on the way to third overall in the Super One Series, as well as winning the coveted ‘O' Plate.

He experienced a frustrating time in 2011 due to carburettor issues and a chassis that wasn't as competitive as it needed to be. As a result he moved into the Rotax Mini-Max category early to use the end of the season to prepare for the next, finishing 10th out of 30 drivers in his first meeting.

2012 would act as a trigger for what was to come over the next three seasons, the talented 12-year-old crowned champion in the Formula Kart Stars series and runner-up in the MSA Super One British Championship.

2013 saw Lando take part in the WSK Euro Series, the Winter Cup, the Rotax Super One and the Euro Max in 2013. As part of the Ricky Flynn Motorsport team, the youngster saw plenty of success in his debut year in the premier junior karting category. He showed his class and talent to become the CIK-FIA European KFJ champion, WSK Euro Series KFJ champion and CIK-FIA KFJ Super Cup champion.

He was also vice-champion in the WSK Master Series and seeded fourth in the World Championships after a non-score in the opening round and a win in Bahrain.

In 2014, he moved up to KF, the premier senior category whilst also competing in the one-make Ginetta Junior Championship. The step-up to KF made little difference to proceedings with a podium finish in the very first round of the CIK-FIA European KF Championship.

Despite his engine seizing in the third round in Genk in which he was certain for a win, Lando came third overall in the Championship – an impressive feat against older and more experienced drivers.

2015 saw the move up to single-seaters, the 15-year-old contesting the inaugural MSA Formula Championship with Carlin. Notching up an impressive eight wins across the season he was crowned the FIA Formula 4 Champion of Great Britain at Brands Hatch in October, the fact that he was one of the youngest in the competition, making the feat all the more impressive.

In February 2017, Lando was recruited to McLaren's Young Driver Programme ahead of a season which witnessed him continue his phenomenal rise through the motorsport ranks in 2017 by becoming the youngest FIA Formula 3 European Champion in history.

Teaming up with Carlin, the team with whom he took the inaugural MSA Formula title in 2015, Lando's championship campaign began in April at Silverstone and was fought over 10 race meetings across Europe, supporting WEC, DTM and WTTC calendars.

In August 2017, Norris made his F1 debut, driving the McLaren on the second day of the mid-season test in Hungary. Setting the second best time of the day, just 0.261s off Sebastian Vettel's pace - in the McLaren Honda remember - it was a debut that caused those few inhabitants of Planet Paddock who hadn't heard of the youngster to sit up and take notice.

In early November, Lando was named McLaren's third and reserve driver for 2018 and while the scheduled tyre test at Interlagos was cancelled the youngster put in another spirited performance at the post-Abu Dhabi tyre test at the end of the month.

Alongside his duties with McLaren, 2018 would see Lando contest the F2 championship with Carlin, his fourth season with the British outfit which would be making its F2 debut.

Lando's season got off to the perfect start, taking pole in Bahrain and converting it into a win. However, while there were eight further trips to the podium, there were no further wins. At season end however, the youngster had done enough to finish runner-up, albeit 68 points adrift of championship winner George Russell.

Interestingly, just three races into the F1 season, it emerged that Toro Rosso had approached Lando with a view to him replacing Brendon Hartley, however he and McLaren firmly rebuffed the Faenza outfit's advances.

Alongside his F2 duties, Lando made seven appearances for McLaren in the Friday practice sessions as it became increasingly clear that he would either be replacing Vandoorne or Alonso in 2019. In addition he drove both days of the in-season tests in Spain and Hungary, and, by now confirmed as a McLaren driver for 2019, one day of the post-season test in Abu Dhabi.

However, he joined McLaren – much like George Russell at Williams - at a difficult time in the team's long history, and it remained to be seen whether the Woking outfit could substantially turn things around.

Having seen Vandoorne's career come to grief at Woking, it was hoped that Lando wouldn't become another casualty of a team that appeared lost and leaderless.

Thankfully, with the appointment of Andreas Seidl the team was no longer "lost and leaderless", and as the Woking outfit finally began to find its feet again, Lando - and teammate Sainz - were ready to do their bit for the cause.

In only his first outing the Briton qualified an impressive 8th, and though he was not able to convert this to a points finish next time out he brought the MCL34 home in sixth.

Though not as consistent as his teammate, Lando added to his tally in France and Austria, though a needless clash with Stroll in Spain somewhat blotted his copybook.

Suffering an engine issue in Germany, a race where anything could and indeed did happen, his only other retirement for the remainder of the season was in Mexico where the car was withdrawn 48 laps into the race following a botched pit stop. Then there was Belgium where he was running fifth when a "mechanical issue" on the last lap saw him drop to 11th.

While he scored points in 11 races compared to Sainz' 13, the Spaniard racked up 96 points whilst the Briton could 'only' manage 49, and though Lando out-qualified his teammate 11-10 we mustn't forget that there are no points given for Saturday's performances.

Overall however, it was an impressive rookie season, and in the eyes of most he was the rookie of the year, though many feel that particular award belonged to Alex Albon.

If Andreas Seidl sees Sainz as part of McLaren's grand plan moving forward, then Lando must be another significant cog in the machine.

Impressive in his debut season, the Briton enjoys a great relationship with Sainz, which in turn helps build team morale.

That said, much as we appreciate the fun and games, in his second season Lando must build on the foundation that was his debut season, and really begin to match his teammate on Sundays.

All in all, based on the evidence of 2019, McLaren has the makings of a fine team again, and while James Key is charged with the job of providing the best possible chassis, and Seidl the job of getting the very best out of the team, it is down to Lando and his teammate to provide the results.

Though the team continues with Renault power this season, Lando must already be licking his lips in anticipation of 2021 when he will have the Mercedes power unit behind him.