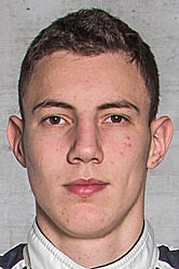 Starting out in karts aged 10, over the next few years Raffaele won the Swiss Championship Super Mini in 2005, the Copa Campeones Trophy KF3 in 2008 and finished fourth overall in the WSK International Series KF3 in 2009.

In 2010, still only 15, he made the switch to single-seaters, contesting the Campionato Italiano Formula ACICSAI Abarth. Taking two wins and four podiums from the nine races he ended the championship 3rd.

At season end, he and champion Brandon Maïsano were inaugural members of the newly created Ferrari Driver Academy.

Next year he moved up to F3, contesting the Campionato Italiano series, in which he finished third. He also took part in the FIA F3 International Trophy but without success.

In 2013, he won 13 races and made 19 visits to the podium on his way to winning the FIA European F3 Championship with Prema Powerteam. Scoring 12 poles and 7 fastest laps as he held off Felix Rosenqvist and Alex Lynn.

Having tested both GP2 S and World Series by Renault cars in late 2013, for 2014 Raffaele opted to contest the former with Racing Engineering. Taking his first victory at Spa-Francorchamps following an intense fight with Stoffel Vandoorne, the Italian youngster finished the season 8th overall.

In November, Raffaele made his F1 debut when he drove the Ferrari F14T in the post-season test in Abu Dhabi, setting the second fastest time of the day.

Having announced that he will continue with Racing Engineering in GP2 in 2015, on 31 December, Raffaele was confirmed as test and reserve driver at Sauber, no doubt part of a deal between the Swiss outfit and its engine supplier.