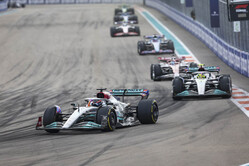 Mercedes has explained the thinking behind the decision not to pit Lewis Hamilton under the safety car in Miami, admitting that its deployment came at "completely the wrong time".

While the seven-time champion made his stop on Lap 22, rejoining the race in seventh, his teammate George Russell didn't stop until Lap 40 when the VSC was initially deployed following Lando Norris' crash.

The Briton rejoined behind his teammate as the pair hunted down Valtteri Bottas, eventually passing the Finn when he made a mistake on Lap 48.

As he battled with his teammate Hamilton questioned the team's strategy, Russell eventually passing just seven laps from the end.

Already under pressure due to the ongoing problems with the W13, Hamilton's mood clearly wasn't helped by losing out to his teammate.

"The VSC came first, and we pitted George, exactly the right thing to do," explains technical director Mike Elliott in the latest video debrief from the Brackley squad.

"We were then in this position where we would have had quite a big gap between Valtteri, closely followed by Lewis, with George a chunk behind.

"And at that stage of the race, with both Valtteri and Lewis on the hard tyre, Lewis was closing on to the back of Valtteri and was going to have a chance to overtake him on track for a normal racing pass, and that's what we expected the race to sort of pan out.

Elliot admits that in the end it came down to the bad luck of the safety car's timing.

"We were caught between a rock and a hard place," he admits. "The safety car came at completely the wrong time for Lewis. If we didn't pit him, he was always going to have George behind him on a much newer tyre. If we did pit him, he would lose track position to George, he would end up behind George on track.

"Although Lewis would have had a new tyre, the only new tyres we had available to us was the hard or the soft, and while you might think the soft would have been a good solution, we knew that the soft tyre would overheat very quickly.

"We knew it would overheat even more quickly because he was just behind George fighting on track, and that would have put even more heat into the tyres.

"So, we were in that position where we were sort of caught between a rock and a hard place, and there was no sort of real right answer."

Turning to the radio exchange between Hamilton and chief strategist James Vowles, Elliot explains: "If you were watching the TV, you would have seen us asking Lewis what did he think he wanted to do? That was because there was no right or wrong answer, and sometimes the drivers have a better feel in the car than we as the engineers do looking at the data.

"So, as it happened, it was just the circumstances that took place meant Lewis lost out because of the safety car.

"Unfortunately, Lewis has been unlucky a couple of times already this season. But it is just the way that things pan out and hopefully over the season it balances up, and he will have some advantages that come to him through the timings of the safety cars in future races."