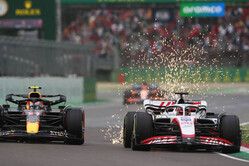 Haas F1 Team drivers Kevin Magnussen and Mick Schumacher finished Saturday's 21-lap Sprint race in P8 and P10 respectively, with both drivers subsequently assuming those positions on the grid for Sunday's 63-lap Emilia Romagna Grand Prix - the first time both Haas F1 Team drivers will start a race inside the top 10 since the Brazilian Grand Prix in 2019.

There was early action in the Sprint with Schumacher passing the Mercedes of George Russell on the opening lap for P11 before a four-lap safety car period followed - the result of Guanyu Zhou (Alfa Romeo) hitting the barriers at Turn 10 after contact with Pierre Gasly (AlphaTauri).

Racing resumed on lap five with DRS enabled two laps later. Unfortunately for Magnussen, the cars around him running Pirelli's P Zero Red soft tires proved quicker and made full use of DRS also - with Magnussen and Schumacher both utilizing the Yellow medium compound for the Sprint. The Dane dropped to P8 after successive laps but successfully held off the Alpine of Fernando Alonso to claim the final points paying position of the day and a fourth-row grid slot for Sunday.

Schumacher enjoyed a relatively quiet outing running P11 for the majority of the race - easily keeping Russell behind in P12. The German passed his countryman Sebastian Vettel (Aston Martin) on lap 15 to capture P10 which he then held through to the checkered flag. The result marked Schumacher's best finish in Formula 1 and his best grid slot - the 2020 F2 Champion starting inside the top 10 for the first time in his career on Sunday afternoon.

Kevin Magnussen: "We were super surprised to see everyone on softs, that's not what we wanted to see, but we judged that the softs would degrade too quickly so we went for the mediums. Everyone just seemed to pass me at the beginning of the race and then it kind of reset so we were on the same pace, at least with Ricciardo and Alonso. It's nice to get a point today and P8 - we would normally be happy with P8 in qualifying - so let's look at the positives. We're starting in the top 10 tomorrow for the main race and hopefully we'll be able to score some more points."

Mick Schumacher: "I think for us, we definitely chose the right tire. We had some good battles but unfortunately still not quite in the points, so hopefully for tomorrow we will be in a position to do that. Obviously fighting with a lot of cars around us, one of them being Seb (Vettel) which was a great fight, was good fun. We'll have to wait to see how it is with higher fuel but everything we've learned from this morning was promising."

Guenther Steiner, Team Principal: "Maybe we expected a little bit of a better result, but it seemed that Kevin wasn't really happy with the balance. On the other side, Mick did a good job and gained two positions for tomorrow's starting grid. All in all, we scored a point which is a positive and Mick is up two positions for tomorrow. We need to find a slightly better balance of the car and then try to get some points as well tomorrow."