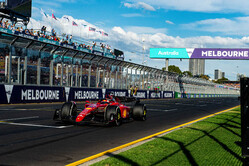 Scuderia Ferrari has won the Australian Grand Prix for a tenth time. Charles Leclerc represented the Maranello marque on the top step of the podium, taking his second win of the season, his fourth with Ferrari, putting him level with Eddie Irvine, Clay Regazzoni and John Surtees. Leclerc led all 58 laps around Albert Park, also setting the race fastest lap, thus taking his first ever “Grand Chelem.” It was Scuderia Ferrari's 240th victory. The only regret on the day was Carlos Sainz's retirement on lap 2, after he went off the track at turn 11, following a difficult start from ninth on the grid. Despite this, Ferrari has only dropped one point to the second placed team in the championship, which got both its cars to the line. It has moved a further eight ahead of the team that has had the faster car in this first part of the season, but only got one car to the chequered flag today.

The Australian race, run on a very different type of track to the first two rounds in Bahrain and Saudi Arabia has confirmed yet again that those in Maranello have done a good job. The F1-75 has been versatile in adapting well to the characteristics of the different tracks and Charles was comfortable right from the start today. In the early laps, he was able to fend off Max Verstappen, the only driver who looked capable of putting him under pressure. But Leclerc managed to pull away thanks in part to the F1-75 allowing for better management of the Medium tyres. This was also seen later when after the second Safety Car, brought out following Sebastian Vettel's crash, all the cars were already running the Hard tyres.

Carlos had a tough afternoon. A problem with some switches meant the team had to change the steering wheel on car 55, just a few minutes before the start. This did nothing for the Spaniard's concentration and he did not get off the line well, partly because he was starting on the Hard tyre, chosen to go for a different strategy to those around him on the grid. Trying to make up ground having dropped to 13th, Sainz spun at turn 11 and was beached in the gravel trap.

Now the team will tackle the long trip home from Australia where all the data will be analysed in Maranello before the Easter break. The next round is in Italy, the Made in Italy and Emilia Romagna Grand Prix, host of the first Sprint of the season. The team will arrive at the Autodromo Enzo e Dino Ferrari on 104 points, ahead of Mercedes on 65 and Red Bull on 55. Charles leads the Drivers' classification on 71 points, ahead of second placed George Russell on 34.

Charles Leclerc: What a great victory this was for us! We managed our pace well and were extremely competitive. We didn't suffer from tyre degradation, even when pushing hard. The car was just amazing and I'm very pleased with how my race went.

On paper, this was a track that we expected to be tough for us, so we have to review our data because we were in fact very strong.

It's a great way to start the season, but we have to keep in mind that we are only three races into a very long championship. We can't afford to relax at any moment and have to stay on top of things, most of all on development.

Congratulations to everyone on our team. What an amazing job you have all done! I'm very proud of how far we've come and can't wait to continue fighting. Forza Ferrari!

Carlos Sainz: This is definitely a difficult weekend to digest. After all that happened yesterday, I was looking forward to the race but we hit problems even before the start. On the laps to the grid we had an issue with some switches on the steering wheel and we had to change it one minute before the formation lap. Unfortunately, at the start, the anti-stall kicked in.

Trying to recover and overtake, I made a mistake as I pushed too early when the tyres were probably not ready. Up until Q3 the weekend was going ok but from then on everything just went wrong. We will analyse it carefully, learn and move on. The car felt good so congrats to the team and to Charles for the win. We'll come back stronger in Imola.

Mattia Binotto: I am very pleased. It's always great to win and it also boosts the morale of the team who deserve all this, because they have all developed the right mentality to face difficult moments head on and make the most of any opportunity. We always say that you can only come out on top in Formula 1 if you do everything to perfection and I think today's race proved that. Charles delivered a mature performance, something he is now making a habit of.

It's a shame for Carlos, because his weekend was complicated by a series of circumstances in both qualifying and the race, which affected his performance. I know him well enough to believe that he will turn the negatives to his advantage and come back stronger next time he's in the car. The start of the season has been positive and the work of the past few months is paying off. We will continue to concentrate on ourselves and take it one race at a time. We have earned some time with our families over Easter, but then we will get back to it, working on the next race, which being at Imola, takes on even greater importance. We can't wait to be there and we're looking forward to seeing the circuit packed with our fans, to share this good start to the year.