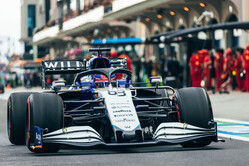 Nicholas recorded his fastest lap, a 1:26.086, on his final effort of Q1 using the soft tyre but unfortunately missed out on progressing to Q2. On his final flying lap in Q2 using the medium tyre, George looked set to progress to Q3 but lost time running wide in the final corner and failed to improve on his best time of a 1:25.007.

Dave Robson, Head of Vehicle Performance: Both drivers showed excellent pace today in tricky conditions, but both were unlucky at key moments. The rain held off longer than we expected at the start of Q1, but we adapted and were in decent positions. George was able to improve and make Q2 but for Nicky, a small mistake at T1 cost him his first effort and we then had to decide whether to push again or prepare for a final push lap. We opted to push again but with conditions improving, other cars had the opportunity to better his time and unfortunately, he missed out.

In Q2, we opted for a strategy similar to Austria and George was on an excellent lap on the Option tyre when a small mistake at the last corner robbed him of a certain place in Q3.

The car has worked well this weekend and we made some good decisions today, but the margins for error are so small in Formula One, that we are left frustrated by the end result. More rain is expected overnight and so there are likely to be further opportunities tomorrow when we hope to enjoy some better luck.

George Russell: There were too many mistakes on my side today. At the end of Q2, I was on a really strong lap which would have easily been good enough to get us through to Q3. I unfortunately lost all the time in the last corner which is a big shame as the lap up to that point was incredible. I'm really trying to push the boundaries at the moment, but I went over it today and it's not good enough from my side. The conditions weren't easy but it's the same for everybody and I expect more from myself.

It's going to be an interesting race tomorrow as the green track means that nobody knows for sure what the right strategy is going to be and how the tyres are going to perform. Unfortunately, it's now going to be much harder for us starting from 13th rather than inside in the top 10, so it's frustrating.

Nicholas Latifi: The car was feeling decent and the track conditions were quite changeable, with the rain starting and stopping, so it was about being on the track at the right moment and setting a lap when it mattered. Every time I was doing a lap, it was consistently putting me in the top 15. But on the last two laps, when the track was at its driest, we didn't execute it. It's very frustrating as the performance has been good enough to progress into Q2 in the last few races.