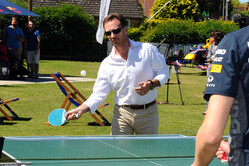 A gracefully arcing shot, swinging relentlessly towards the back of the net was a sight to behold, and the call to a loud chorus for supporting fans, and groans from the soon to be defeated. David Beckham inspired a generation of creative footballers to, well, be creative in their shot taking.

Now to ease slightly to starboard, and in the direction F1 is sailing, bending it like Beckham is a creative step too far. This from an FIA claiming to foster innovation, most especially to pass along to road cars. Horner and Co. get creative, bend it a tad in the name of art and performance and... bingo! Faster than you can say "the Stewards are blind!" we have another complaint about the creative art of going fast enough to win.

I'm sure Tennis could give the other players a chance of getting into the last four if they banned Federer, Nadal, and Jockovic from practice. They could then make them play with smaller rackets, just for the sport of it. Or make them hang weight belts around their middles. Or play in stilettos. Or a mind-blowing combination of all those impediments. How about stilettos combined with rubber chickens rather than rackets? Would you pay to see that, so Chip Long-Lob of Soberton Heath has a small chance of reaching the quarters?

Surely such madness would curse Tennis, not save it from itself? So why, dear reader, does F1 feel the need to hobble the genius and cuss at the gifted by limiting practice, and killing ideas that actually deliver on-track racing?

We all know the big teams simply spent the real world testing budget on super computers for CFD analysis, and stunning simulators. It just changed the dynamic of how they created a winning advantage over the little guys. So now, within the current rules, it would appear Horner and Co. have found a way to regain some speed and give V. Max a chance to catch Lewis, thus gifting us all the delights of an on-track battle for the championship!

What right thinking ruling organisation wouldn't want to destroy that delightful situation? Change the rules! It looks like V. Max might give Sir Lewis a Battle Royale!

Thankfully, dear reader, the FIA exists to ensure horrid dangers such as that of two F1 cars being side-by-side approaching a corner, with no one able to predict who will exit said corner in front, do not befall us! They know after the last three seasons of relaxing circular motion, that such excitement will have the fan-base dropping like flies as heart failures ripple around the world in an uncontrolled Tsunami of shock. Lewis, and Max need to be saved from themselves, and we need to be saved from our manic lust for unpredictable sporting excitement!

I mean. Just look how the racing became safer, and our blood pressures all lowered back into the green zone once the Ferrari engine was nobbled by the FIA! Who was not relieved at seeing Vettel saved from himself with all those risky moves because he felt he had a chance to be on the podium, or win the race? Far safer to orbit at a relaxed pace back in 15th, with lots of clear air, at least several seconds worth, buffering him from the car in front, and behind. The FIA only has all our tender, easy to bruise hearts, well, at heart. Safety. Safety. More safety, and a heavy prescription of do it my way.

Can you imagine a better way to generate sporting spectacle? Of course not. Heavily prescriptive rules, crushing cost caps, minute amounts of testing, and coming down like the sword of an avenging angel on the neck of anyone who has a bright idea. And that's even before the stewards get going on track limits, and demanding drivers only listening to the Spice Girls over their headsets during the formation lap!

It's starting to make Federer, and Nadal playing in stilettos and using rubber chickens as rackets look like a sensible, sport-enhancing, concept!

Why then, even your humble scribe, and esteemed editor Balfe might make the final four at Roland Garros! Who wouldn't pay big dollars to see that...?

So Horner and the gang had another idea that is probably on the absolute wobbling knife edge of the rules... which is precisely what they should be doing to take the fight to Mercedes! We the fans have revelled too expansively in the first races of the season, where we actually did have a race at each round, on track! What sensible governing body in this RU-OK?, COVID, Mental-health pandemic, caused by a pandemic moment would not seek to return sanity and relaxation by ensuring Lewis has at least 35 seconds over every non-works Mercedes by the end of the second lap?

Readers might remember the PR fail that was Airbus showing how safely over-engineered the A380 was by exerting additional pressure on the wings of a prototype that was way and beyond that required by aviation authorities, and their calculations of the "worst possible inflight event". Well the wings bent, and stayed bent. Whoops. All things will bend if enough pressure is applied. Wings, Donald Trump's quiff, IKEA furniture, your own trusty 2HB pencil from way back... All have an elastic limit to which they will cheerfully bend, and return to their start state... Each then has an in-elastic limit, which once reached, like the wings of a stressed A380 prototype, will not return to their start state.

Back in pre-COVID times when all who fancied could partake of air travel, the wings of your aircraft would bend significantly when they shouldered the load of you, your fellow passengers, crate loads of red wine, and all the monkeys with typewriters locked in the hold - where do you think all those surreal inflight magazine articles, or travel diaries in Vogue came from? - that Miss Physics made their aerodynamic problem the moment the aircraft "rotated", which is to say, the wheels left the ground. Aerodynamics, and bending go together even more naturally than gin and tonic. More so than a warm pot and fresh dark leaf tea. Far more so than even Frodo, and the ring. So one applies aerodynamic load to the wings of a Red Bull, and Miss Physics assures all with their head in the real world that they, will, must, and surely, do bend.

So the FIA will get, once more, all prescriptive on our butts, and demand that Miss Physics has her aerodynamic, and bending physical object buddies do so only, and specifically to the amount they, the Masters of the Universe FIA, will allow.

Otherwise V. Max and H. Lewis might actually race on track, arriving at corner after corner side-by-side thanks to Horner! And who in their right mind wants such unpredictable madness!?

Lord above! Someone soak the rubber chickens, and stilettos in sanitiser then give the FIA Federer's number! Tennis needs to be saved from itself before it is too late! Any more bending it like Horner, and none us will know what will transpire at the next corner!