No further action over Bottas/Russell clash 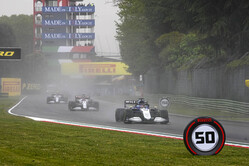 The Imola stewards have deemed that no further action is required following today's incident involving Valtteri Bottas and George Russell.

The two collided on the 30th lap on the approach to the infamous Tamburello corner at which Ayrton Senna perished in 1994.

One of the fastest parts of the Italian track, such was the debris that the race had to be red flagged.

In the moments following the collision Russell got out of his car and walked over to where Bottas was still sitting in his Mercedes. Following a brief exchanged, during which the Briton clapped the Finn's helmet, Bottas responding by 'giving the finger', both blamed the other.

"I was coming on Valtteri massively fast," said the Williams driver. "I had the slipstream, I had the DRS, just as I pulled out he jolted very, very slightly to the right, which is a tactical defence that drivers of the past used to do.

"The sort of Verstappen move of 2015," added the Briton, who was recently appointed a director of the Grand Prix Drivers' Association.

"There's a gentleman's agreement that that is not what you do because it's incredibly dangerous. In completely dry conditions I would have been fine but it just put me onto the wet patch and I lost it.

"An unfortunate incident but we are going at 200mph you need to respect the speed and the conditions. We're going incredibly fast, we know the conditions, in his eyes he's not really fighting for anything, a P9 for him is nothing, but for us it's everything.

"I'm going for absolutely everything, the move would have been absolutely easy. There was absolutely no reason to jolt like that.

"We're both grown men," he continued, "we'll have a conversation and talk about it, let the heat die down a bit.

"I'm sure he's upset and frustrated with me as I am with him," he admitted. "The faintest of movements when you're travelling at 200mph is actually quite a massive thing.

"More so it's not just the speed, it's the speed difference, I was probably doing 30mph quicker than him and about to overtake him. Perhaps if it was another driver he wouldn't have done that."

"I could see him earlier on the straight, then I noticed that he moved to the right," said the Finn. "From the replays I saw, I always left space for two cars to be there, but he obviously lost it and hit me, and that was game over."

Asked about the moment when Russell subsequently appeared to remonstrate with him, Bottas said: "I don't know what he was on about, because it was clearly his mistake. I was not happy with him. But that's how it is."

The stewards, having heard from both drivers, their team representatives and having reviewed multiple angles of video evidence and telemetry, deemed that Russell approached Bottas to pass after the front straight a few laps after the restart when DRS had recently been enabled.

Bottas maintained his line throughout the incident along the right hand side of the dry line, leaving at least a full car's width to the right at all times.

Russell approached with a significant speed advantage and as he moved to pass on the right. As the cars approached the kink of Turn 1, the gap between them and the right hand side of the track decreased.

At no time did either car manoeuvre erratically, the stewards felt. The track appeared to be not especially wet through Turn 1 but at the point of closest approach to the right hand side of the track, the right hand side tyres of Russell hit an especially damp patch and the car snap yawed, bearing in mind that the car had low downforce in the rear with the DRS open.

The stewards concluded that the accident was a racing incident considering the conditions and opted to take no further action.