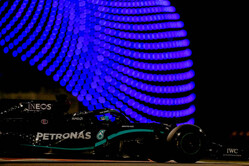 Admitting that being back in his car feels like the "first day of school", Lewis Hamilton pays tributes to Sakhir GP stand-in, George Russell.

Having been given the all-clear to race only late yesterday evening, thereby dashing the hopes of both George Russell and Jack Aitken, Lewis Hamilton was back in action this morning showing no after-effects of the virus that caused him to isolate for ten days.

Finishing fifth in the opening session, the world champion was only marginally off the pace of his teammate in the second, as he admitted that it was good to be back at work.

"It felt like a first day back to school kind of thing," he told Sky Sports. "So it definitely took a minute to get back used to it for the first session, and then the second one, I think I was still getting my bearings, but not too bad.

Asked if he was happy to be able to sign off the season, the Briton was adamant that he had nothing to prove.

"I just want to come here and enjoy it this weekend and enjoy what I do," he said. "It's been a huge amount of work from everyone back at the factories, and it's been a privilege to race with them this year.

When asked if it had been strange to see George Russell in his car last week, Hamilton said: "I think George did an amazing job, and I think everyone knows that.

"I think it was definitely odd," he continued. "From my 27 years of racing, I've never missed a race. So yeah, one day, I'll write a book about it. But as I said, I'm just grateful to be back."