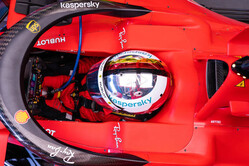 Both Scuderia Ferrari drivers had to retire from the 71st Italian Grand Prix at the Autodromo Nazionale di Monza. Sebastian Vettel had a brake problem while Charles Leclerc crashed at the Parabolica, but emerged unscathed.

When the lights went out, Charles stayed 13th while Sebastian lost a place to George Russell in the Williams, but he got it back on the following lap. However, on lap 6 his SF1000 had a brake problem, which meant he had to retire on the next lap.

On lap 18, Charles pitted to switch from Soft to Hard tyres, rejoining in 17th place. On the next lap, Kevin Magnussen had to park his Haas at the side of the track with a problem, just before the pit lane entrance. This brought out the Safety Car, so that all the other cars took the opportunity to pit. Charles thus found himself sixth. At the restart, Leclerc was on a charge and passed the Alfa Romeos of Kimi Raikkonen and Antonio Giovinazzi to move up to fourth. Unfortunately, on the next lap Leclerc lost control of his car, crashing heavily into the barriers at the Parabolica corner. It was a frightening accident, but fortunately, Charles was not hurt.

The busy season continues and next weekend, still in Italy, the final race of this third triple header of the year, the Toscana-Ferrari 1000 Grand Prix, the Scuderia's 1000th race, takes place at Mugello.

Charles Leclerc: "It was a very difficult race and I struggled quite a lot with the balance. I thought at first we were unlucky when the safety car came out, but due to the fact the pit-lane remained closed, we were actually pretty lucky. We were in a very good place at that point, but I was struggling a lot on the hard tyres. I tried to push but then I made a mistake, lost the rear and crashed at Parabolica.

"The crash was quite a big one but I am ok. A bit of pain here and there, which is quite normal.

"We have had two difficult weekends for the team, but it's like this at the moment and I hope we can bounce back, so I am looking forward to Mugello."

Sebastian Vettel: "This is a very difficult moment for the whole team and as part of it, I am suffering along with everyone else. But this is our reality right now and we need to try and do the best we can, to have a worthwhile final part of the season with still plenty of races to go. We have a lot of work to do and we have to be focused on that.

"As for my race it was very short as almost immediately I had an issue with brakes. I went on the brakes in the first chicane but the car didn't slow and I had to drive through the run-off area. Actually it was the best possible spot to have the issue.

"We have to keep our heads up, even if it is difficult. Now we head to Mugello, a completely different track and maybe there we could be in a bit of a better place. Hopefully we can have a clean weekend."

Mattia Binotto, Team Principal: "Retirement for both cars is the worst possible end to a very difficult weekend. After Belgium, we knew that here too we would struggle a lot and so it turned out. That was clear in yesterday's qualifying but failing to get either car to the chequered flag really hurts. It's even more disappointing that Sebastian's retirement was down to a lack of reliability on the car. Problems like that, in this case with the brake system, should not happen.

"It's a very hard season but it's by facing up to difficulties like these that you get stronger. We must look ahead and there are useful lessons for all of us to take away from this to build for the future. Having said that, we must absolutely not give up and we will be giving our all next weekend at Mugello which is a special event for us, being our one thousandth Formula 1 Grand Prix."